Man Cries Out Over Alleged Corruption, Conspiracy By Nigerian Cops At Police Headquarters In Umuahia 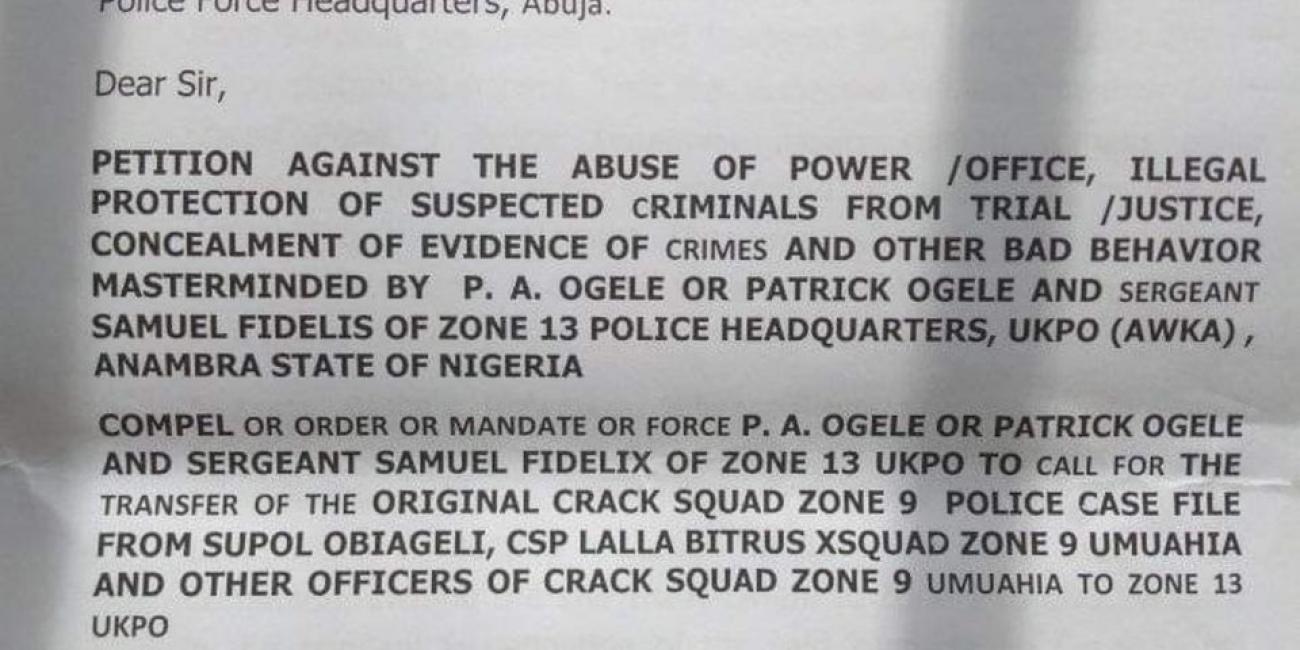 An indigene of Anambra State, Mr. Chukwunenye Nweke, has petitioned an Assistant Commissioner of Police in Abuja.

He petitioned the police over alleged corruption, conspiracy and perversion of justice by personnel of Zone 9 police headquarters, Umuahia.

Nweke told SaharaReporters that on July 20, 2018, he reported a case of “criminal perversion of justice, criminal conspiracy, fabrication of exhibits, forgeries and falsification of documents, threat to life, false information, inducement, abuse of court procedure, perjuries and other criminal activities” to the Assistant Inspector General of Police (AIG) of Zone 9, Mr. Karma Hosea.

According to Nweke, the accused persons include Chief Chukwuka Onuko, Mrs Ogochukwu Ikunne, Mr Ndu Onuko and Dr. Mrs Aguiyi Anuli Ihuoma, who is a staff member of the College of Education, Nsugbe, Anambra State.

He said he paid the sum of N120,000 to open the case file at the Zone 9 Police headquarters, Umuahia and the case was detailed to a Superintendent of Police identified as Supol Obiageli, one Obinna Godswill and Officer-in-Charge (OC) of Crack Squad, CSP Lalla Bitrus for investigation.

Following his report at the Zone 9 Police headquarters, police invited Dr Aguiyi Anuli, Chief Onuko, Mrs Ikunne and Mr Onuko to the Crack Squad of the Zone for interrogations on July 26, 2018, and on August 6, 2018.

It was learnt that the accused persons went to the Crack Squad and tendered their statement papers, where they denied forging police documents and perpetrating any of the crimes alleged by the complainant (Nweke).

Rather, they alleged that the documents which Nweke accused them of having forged were issued to them by a police officer, Friday Uwem.

The Zone 9 Police headquarters AIG, Hosea, therefore, directed SUPOL Obiageli and CSP Bitrus to send a message to 51 PMF, Delta State Police Command and invite the said Uwem to Zone 9 to either confirm or refute the claim of the accused persons.

On November 21, 2018, Uwem honoured the Zone 9 invitation and made his statement under the supervision of SUPOL Obiageli. And in his statement, Uwem indicted the accused persons of criminal forgeries/falsification of public documents, perjuries and other criminal acts, confirming Nweke’s allegation.

Nweke said, “However when they (accused persons) noted that they had been indicted of criminal activities by the police investigation conducted by Crack Squad Zone 9, they rushed to Monitoring Unit Zone 9 and made a report of character defamation and other alleged crimes against them.

“Monitoring Unit Zone 9 Umuahia hurriedly charged me to Magistrate Court, Awka without carrying out a deep or proper investigation into the criminal activities by the people I reported to the police, and my prosecution was assigned to U. S. Ekpo Esq by O/C Legal Zone 9, CSP Samson Onyemauche Esq.”

He lamented that all his efforts to get the original police case file on the criminal activities investigated by CSP Bitrus, SUPOL Obiageli and other officers of the Crack Squad Zone 9 Police headquarters, Umuahia to prove his innocence in court had been unsuccessful.

He alleged that Zone 9 Police headquarters refused to release the original case file from the Crack Squad Unit because “the rich suspects (accused persons) in my complaints probed by Zone 9 were heavily indicted of crimes by police but the suspects (accused persons) induced (bribed) Zone 9 to conceal their criminal acts and this is why Zone 9 officers have totally refused to transfer the file to Zone 13, Anambra for prosecution and they also refused to tender documents.”

SaharaReporters contacted CSP Bitrus, SUPOL Obiageli, AIG Zone Police headquarters, Isaac Akinmoyede and the Police Public Relations Officer of Zone 9 Police headquarters, George Okafor for comments on the matter but none of them responded to the text messages sent to them nor answered calls made to their phone numbers.

Only SP Janet Egwu responded to the SaharaReporters’ request for comments on the matter but declined to comment on the matter.

“I was the PRO Zone 9 and cannot make any official statement on matters therein now. I am on study leave. Thanks and good luck in balancing your story,” she said.