The fatal crash occurred at the Onitsha head bridge by Asaba-Onitsha Expressway on Friday. 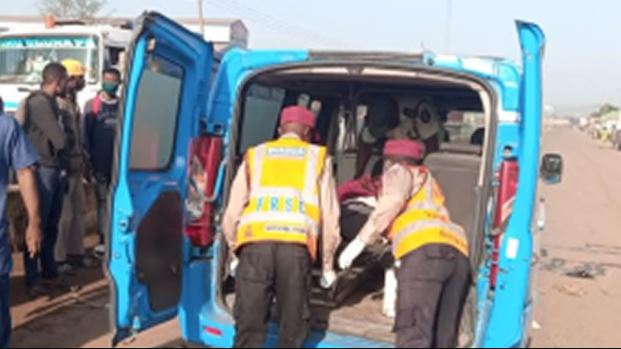 In what will come across as a really startling development, three persons have been crushed to death in Anambra.

The fatal crash occurred at the Onitsha head bridge by Asaba-Onitsha Expressway on Friday.

It was gathered that 10 people  comprising, six male adults and four female adults, were involved in the crash. While three persons, two males and one female died on the spot, three females were injured.

According to an eyewitness, the victims were pedestrians walking down the bridge.

The rescue team of the Federal Road Safety Corps, Onitsha, took the victims to a hospital, where the three persons were confirmed dead by the doctor on duty and their corpses deposited at the hospital morgue.

Onabe attributed the probable cause of the fatal crash to break failure and mechanical deficiency.

She said, “The truck developed fault and broke down on the bridge. On sighting a towing van towing another vehicle out of the bridge. The driver of the truck sensed that the towing truck might come back later to tow his vehicle, he quickly moved his vehicle without fixing the defect.

“The driver moved the vehicle and the brake failed on the bridge, lost control and rammed into pedestrians who were walking down the bridge, killing three persons instantly, while three others sustained injuries.

“The vehicle kept moving and on getting to the place where Ojukwu statue was erected, it finally collided with a bus going towards Asaba and crashed. The driver took to his heels thereafter.

“As of the time of filing this report, the rescue team on the ground are managing traffic, there was no  obstruction caused by the crash, there is normal traffic flow, efforts are being made to tow the vehicles to the police station.”

The Sector Commander, Anambra State, Corps Commander Adeoye Irelewuyi, wished the injured victims quick recovery, while sympathising with the families of the dead victims and prayed for the repose of their souls.

He urged motorists to ensure they service and maintain their vehicles regularly to minimum safety standards before plying the road.