Hunwathan said an argument ensued between him and the cop after she demanded N100 bribe from a taxi driver on Wednesday, October 26, 2022. 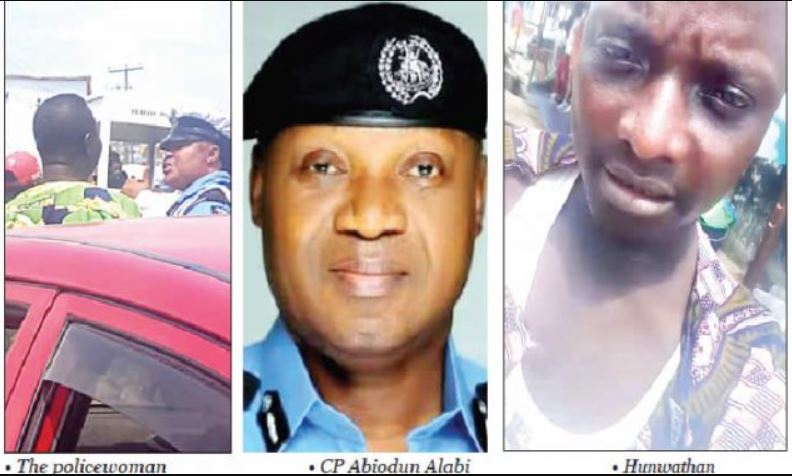 Anu Hunwathan, a chartered accountant, has made startling accusations against a policewoman.

He accused the policewoman of assaulting him and tearing his clothes during an altercation at the Badagry Roundabout in the Badagry area of Lagos State.

Hunwathan said an argument ensued between him and the cop after she demanded N100 bribe from a taxi driver on Wednesday, October 26, 2022.

The University of Lagos graduate explained that his wife just gave birth and he was looking for blood when the taxi he boarded was stopped by the woman, who allegedly threatened to impound the vehicle if the driver did not pay the bribe.

Hunwathan said the cop turned on him when he refused to get down from the vehicle, adding that she held him, tore his clothes and threatened to deal with him.

He said, “My wife has been hospitalised since October 25. They did CS on her and it was successful by the grace of God. But I had to leave the hospital to get some things the doctor demanded. I spoke with the doctor in charge of the hospital laboratory and he told me that they had a shortage of blood.

“I was on the way to where I was supposed to get the blood when they called me to come back that they had just received some supplies in their blood bank and I did not need to get somewhere else.

“On my way back to the hospital, I boarded a taxi which had three other passengers with me inside. When we got to the Badagry Roundabout, we met three police officers there; they stopped the vehicle. A female officer approached us, and the man had no choice than to park in the middle of the road.

“The female officer, who is from the Badagry Police Division, asked everybody to come down, that the vehicle had been impounded. Others alighted from the vehicle, but I told her that I would not alight because I had something urgent to attend to.

“The police officers stated threatening and calling me different names, but I stood my ground. I told her I would not come down.

“When the threat was much and the driver was not ready to give up, I alighted from the vehicle. As I alighted, she took her phone to take my picture, but I ignored her. I was leaving on my own when she rushed at me, held me by the neck and tore my clothes.

“Extortion has been going on at that junction for long, and the driver actually had an issue with her because he refused to pay her N100.”

The victim demanded justice and called for the arrest and sanction of the officer.

The Lagos Police Public Relations Office, Benjamin Hundeyin, did not take his calls or respond to text messages from our correspondent on the matter despite attempts for three consecutive days.