He said the vehicle she was in was only forced to stop when the driver refused to obey the directive to stop and attempted to run over two marshals. 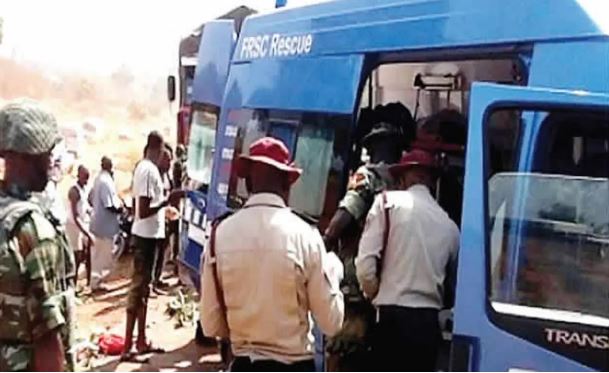 The Federal Road Safety Corps (FRSC), Ondo State Command, has reacted to reports that one of it's officers assaulted a woman.

The FRSC dismissed as fake, the report that its personnel kicked a pregnant woman in the stomach along Akure highway on Saturday.

The State Sector Commander of FRSC, Ezekiel SonAllah who dismissed the claims in a statement said the report shared on Twitter alleged that the woman bled after she was allegedly kicked by a road marshal on Saturday along Akure highway.

The sector commander said the woman was neither kicked nor manhandled as claimed.

He said the vehicle she was in was only forced to stop when the driver refused to obey the directive to stop and attempted to run over two marshals.

SonAllah claimed that the vehicle was overloaded and the driver did not use a seat belt.

He said the two vehicles were coming from keji in Osun going to Ogbese in Akure North Local Government Area of Ondo State when the officials of the FRSC stopped them but one riggled his way and drove off.

The sector commander alleged that the second vehicle also did not want to stop and the driver faced Marshal Aboluja with the car in his attempt to escape.

He further alleged that the driver also attempted to run over another Marshal, Olamigoke, before the vehicle was forced to stop with the help of other team members.

“Immediately the vehicle stopped the passengers came out and started wailing, on getting there a particular woman alleged that she was hit, but nothing was wrong with the woman, no nose bleeding or any bleeding.”

He said when the woman insisted that she was in pain, the marshals took her to a nearby hospital.

“It is not as people are painting it, rather it was Marshal Olamigoke who was injured on the ear.

“We had to call the Scorpion Squad of the Nigeria Police to help calm the situation while the driver was arrested.

“We, therefore, notify the general public and well-meaning Nigerians that the information/news spreading through a Twitter handle @YemieFash about Federal Road Safety Officer in Akure kicking a woman on the stomach and blood was gushing out was fake and false!

“As no such incident nor a trace of it ever happened. We use this medium to pray the general public to discountenance and disregard the fake rumour.

“We remain ever committed to maintaining a safer motoring environment as we go on to discharge our lawful duties,” he said.