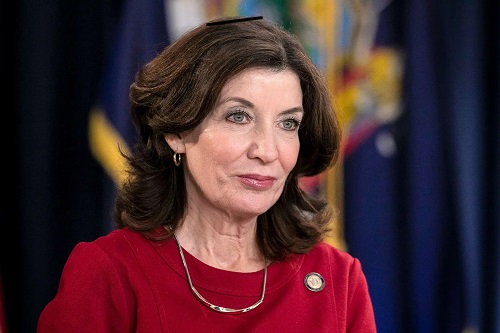 Kathy Hochul has made history after becoming the first woman to be elected as New York Governor.
The Democrat 64-year-old retains the office she assumed in August 2021 when her predecessor, Andrew Cuomo resigned.
Hochul defeated Republican congressman Lee Zeldin, an ally of ex-President Donald Trump.
“I’m not here to make history, I’m here to make a difference”, Hochul told supporters after her triumph.
“I may be New York’s first woman governor, but I know I won’t be the last”, she tweeted on Wednesday.
Hochul won the Democratic primary in June, defeating U.S. Rep. Tom Suozzi of Long Island and Public Advocate Jumaane Williams.
In May 2011, Hochul won a special election for New York’s 26th congressional district after the resignation of Chris Lee.
The victory then made her the first Democrat to represent the district in 40 years.
Top Stories