The athletes were accused of engaging in money laundering, according to a report by Independent Nigeria. 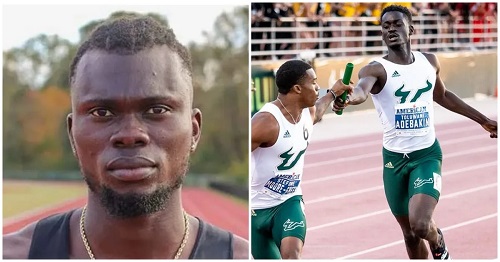 Five Nigerian track and field athletes have been convicted in the United States of America.
The athletes were accused of engaging in money laundering, according to a report by Independent Nigeria.
In a judgement delivered on November 10 in the Southern District of Mississippi, the five collegiate athletes, Aniekeme Etim, Raymond Ekevwo, Toluwani Adebakin, Mercy Abire and Emmanuel Ineh, were convicted before U.S. District Judge Kristi Johnson for transferring thousands of dollars to Nigeria as part of a complex fraud scheme, announced U.S. Attorney Darren J. LaMarca and Special Agent in Charge Jermicha Fomby of Federal Bureau of Investigation’s Jackson Field Office.
In a statement on the website of the US Department of Justice website, the five athletes, including a Zimbabwean, Ugoni Chadyiwa, face up to a 10-year jail term expected to start in February 2023 after they all pleaded guilty to the charge.
“According to court documents, all the six individuals pleaded guilty to violations of Title 18, United States Code, Section 1957, for engaging in monetary transactions in property derived from specified unlawful activities, collectively sending tens of thousands of illicitly obtained proceeds to fraudsters in Nigeria as part of a larger mail fraud, wire fraud, and money laundering conspiracy,” the statement read.
“The scheme involved Track and Field athletes from multiple higher learning institutions in the United States, with part of the conspiracy being operated out of Hattiesburg while the Ineh and Adebakin were Track and Field teammates at William Carey University. William Carey University was cooperative throughout the investigation.
“The defendants are scheduled to be sentenced on February 15, 2023 in Hattiesburg, Mississippi, and faces a maximum penalty of 10 years in prison. A federal district judge will determine any sentence after considering the U.S. Sentencing Guidelines and other statutory factors.
The Federal Bureau of Investigation investigated the case.”
Speaking with our correspondent, a Nigerian coach based in the US, who craved anonymity said it was a shame that the athletes allowed themselves to be used for such a criminal activity. He added that the problem of most athletes is that they don’t speak out to people around them who would have been of help to them.
Top Stories