He will on Thursday jet out of the Republic of Niger to attend the African Union Summit on Industrialization and Economic Diversification, as well as the Extraordinary Session on African Continental Free Trade Area (AfCFTA). 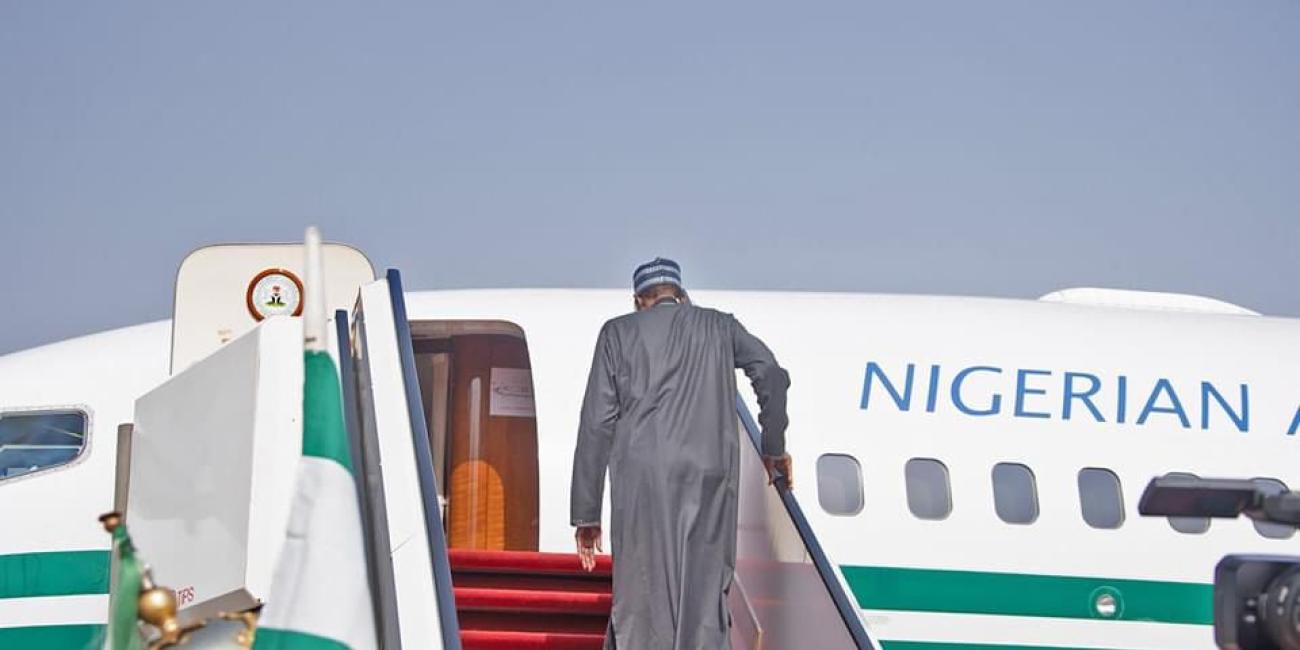 Nigeria's number one man, President Muhammadu Buhari is set to jet out from Nigeria.

He will on Thursday jet out of the Republic of Niger to attend the African Union Summit on Industrialization and Economic Diversification, as well as the Extraordinary Session on African Continental Free Trade Area (AfCFTA).

This comes less than two weeks after he returned from London, United Kingdom. Buhari returned from the UK on Sunday, November 13. The President had left for the UK for about two weeks on a medical trip after attending a security council meeting and a Conference and Retreat for Senior Police Officers in Owerri, Imo State.

A statement issued by his Senior Special Assistant on Media and Publicity, Garba Shehu, on Wednesday, said President Buhari would also attend the launch of a French version of the Book titled “Muhammadu Buhari: The Challenges of Leadership in Nigeria,” as well as inaugurate the ‘Muhammadu Buhari Boulevard,’ named after him by the Republic of Niger government.

The statement read, “The naming of the Boulevard and launch of the French version of the Book, written by John Paden, a Professor of International Studies at George Mason University, northern Virginia, United States, on Thursday precedes the AU Summit on Friday, November 25, 2022.

“The High-Level Summit, being convened as part of the Africa Industrialization Week annual commemorative activities, is expected to adopt a Declaration, highlighting the importance of industrialization and economic transformation in the continent and how to make progress in that regard.”

According to the President’s spokesperson, November 20 of every year has been designated as Africa Industrialization Day, adopted by the Assembly of Heads of State and Government of the Organization of African Unity in July 1989, in Addis Ababa, Ethiopia.

Shehu said, “Meanwhile, the Extraordinary Session on AFCFTA is expected to adopt the Phase II Protocols of the continental free trade area as well as launch additional operation tools.

“Nigeria has continued to demonstrate a high level of commitment toward the full operationalization of a pan-African free trade area that will create a single market for goods and services, liberalise and facilitate the movement of investment and business people across the continent.

“On July 7, 2019, Nigeria signed the AfCFTA agreement in Niamey during the 12th Extraordinary session of the Assembly and launch of the operational phase of the trade deal.

“The country ratified its membership of the AfCFTA on November 11, 2020.”

According to the statement, President Buhari will return to Nigeria on Friday.

Buhari, since he assumed office on May 29, 2015, has embarked on medical and other trips abroad several times, covering hundreds of days within the period he has been in office.

For instance, between February 5 and 10, 2016, the President went to the UK for a six-day vacation, saying that his doctors lived in England. And between June 6 and 19, 2016, Buhari went on a 10-day medical trip to England for an ear infection surgery. He extended the trip by three days to rest.

On January 19, 2017, the President was back in London again on a medical vacation, and on February 5, 2017, he wrote to the National Assembly, seeking an extension of his London medical leave. On March 10, 2017, Buhari returned to Nigeria but didn't resume work immediately at Aso Villa.

The Presidency claimed that "he was working from home."

On May 7, 2017, Buhari embarked on a trip to London for another medical vacation. He returned after 104 days – the longest he had stayed outside the country, as he returned on August 19, 2017, after spending about three months, and it took him a while to resume work because rats had purportedly damaged furniture in his office.

The Presidency, therefore, announced that he would be working from home, and on May 8, 2018, Buhari went to London for a four-day "medical review."

Also, from March 30 to April 6, 2021, the President embarked on another trip for a routine medical check-up in London.

On November 2, 2021, the President secretly abandoned the 26th Conference of Parties (COP26) to the United Nations Framework Convention on Climate Change (UNFCCC) in Glasgow, Scotland to see his doctors in London. And on October 31, 2022, Buhari left for London on a medical trip and returned on Sunday, November 13.