the suspect, an indigene of Enugu State said he use to be under one of the ESN leader, Emenike (aka SAPALE). 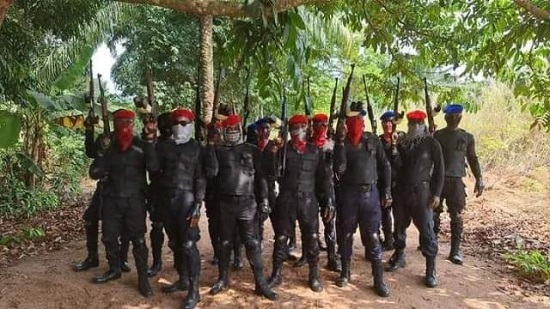 A 19-year-old suspected member of the IPOB's militant arm, the Eastern Security Network (ESN) has been arrested and paraded by the Katsina State Police Command on Tuesday.
According to the spokesman of the Command, SP Gambo Isah, the suspect identified as David Eric Uchenna also goes by the name Ibrahim Muhammed and was arrested at Kofar Sauri Quarters within Katsina metropolis.
SP Gambo further disclosed that the suspect, an indigene of Enugu State said he use to be under one of the ESN leader, Emenike (aka SAPALE) and they have over 400 members in their camp located at Akpogozie forest in Orji River LGA.
Uchenna however alleged that he’s no longer a member of the dreaded terrorists network. He said, “Truly, I am no longer with them. In fact, I am on their wanted list.”
Explaining how he got to Katsina, Uchenna said, “Myself and two others ran to Katsina after we stole the sum of N700,000 from one of the ransom money paid by a kidnapped victim. But they have since fled Katsina for fear of being arrested by the police.
“My mum also lives here in Katsina.”
SP Gambo Isah who paraded the suspect among others suspect noted that Uchenna who is “strongly suspected to be a kidnapper confessed that his gang kidnapped someone in Imo state and collected the sum of ten million-naira (10,000, 000:00K) as ransom but stole the sum of seven hundred (N700,000:00K) out of the ransom and escaped to Katsina State, along with two of his allies, Chuckwuemeka and Chinemerem who had since left Katsina to evade arrest.
SP Gambo further disclosed that the suspect also confessed to have committed series of crimes ranging from armed robbery, kidnapping and other heinous crimes in Nigeria northeast.
Top Stories