Adeleke also explained why he issued the executive orders in his first week as governor of the state. 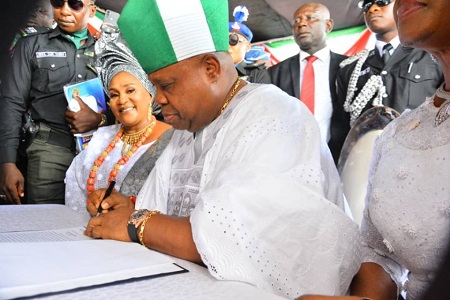 The Governor of Osun State, Senator Ademola Adeleke has began payment of salaries to workers in the state.
This was made public on Adeleke’s verified Twitter account on Monday and signed by his spokesperson, Mallam Olawale Rasheed.
Adeleke also noted that “any Ministry, Department or Agency that fails to submit its salary schedule latest today (Monday) will be sanctioned. Any agency head who obstructs the process of scheduling will face disciplinary procedures.”
“This warning is sequel to report that some agencies are still holding unto their agency’s schedules despite the directive of His Excellency.
“Governor Ademola Adeleke had last week directed immediate conclusion of documentation for payment of salaries. This was a consequence of a report that about 45 agencies are yet to submit their payment schedule.
“Presently, the payment of salaries is ongoing starting with the Ministry of Justice,” the statement added.
Upon assumption of office in November, Adeleke had issued six executive orders.
Adeleke explained why he issued the executive orders in his first week as governor of the state.
Speaking at a thanksgiving service at Eternal Sacred Order of Cherubim and Seraphim, Oke Gada, Ede, on Sunday, Adeleke also recalled the travails he passed through in his path to governorship, citing the conspiracies and the resolute campaign of calumny from within and outside the party.
A statement by his spokesperson, Olawale Rasheed, noted that Adeleke explained that the orders were meant to dismantle illegalities and “clean up the mess” he inherited.
Quoting Adeleke, the statement further read in parts, “We passed through tough days before we reached here. I can’t but constantly praise God, my brother, my sister, my political associates, my friends and the great people of Osun state.
“That massive support accounted for my hitting the ground running a week ago. That was why I issued those executive orders to dismantle all illegalities and clean up the mess I inherited.
“The man I defeated set many traps for my administration but we are removing all the evil structures they put in place.
“I have used the first one week to take charge and set the tone for good governance. From the new week, I will continue the great work. We are shaking up the system ; we are unveiling and commencing implementation of our agenda.
“I thank the people of Osun for their love and show of huge backing. I reassure them that all my actions will continue to be in the best interest of the state.
“All what I have done and will still do are to serve the people, meet their aspirations, and restore good governance in Osun State.”
Top Stories