Prison Official On The Run After Stabbing Akwa Ibom Businessman


Okon allegedly perpetrated the act after Idip, who was driving a vehicle, rammed into a tricycle driven by Okon’s colleague, Emine Moses. 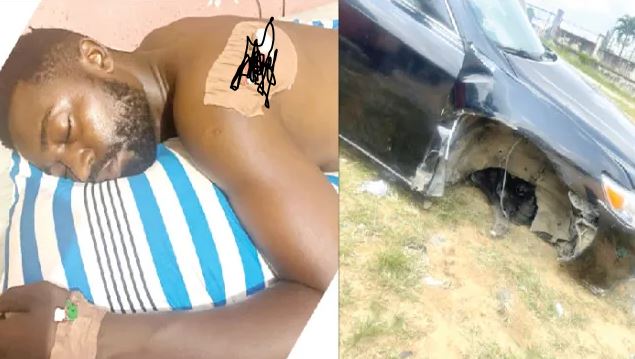 A businessman identified as Aniekpeno Idip, is seeking justice after an official of the Uyo Custodial Centre on Barracks Road, Unyime Okon, allegedly stabbed him with a dagger on Friday, December 2 in the Uyo Local Government Area of Akwa Ibom.

Okon allegedly perpetrated the act after Idip, who was driving a vehicle, rammed into a tricycle driven by Okon’s colleague, Emine Moses.

Idip, who spoke to Punch correspondents on Monday, said he was in motion when one of the front tyres of his vehicle pulled out.

The 32-year-old said he was struggling to control the vehicle when he rammed into Moses’ tricycle, adding that people in the area rushed to rescue him and the rider.

He said, “The accident happened around 8.05pm on Friday, December 2, 2022. I was driving from Nwaniba Road in Uyo and heading towards Barracks Road. But I was on Brooks Street when one of the front tyres of my vehicle pulled out and I hit Emine Moses’ tricycle.

“People rushed to rescue both of us and examined if we sustained any injury. But Moses’ face got swollen. Suddenly, the tricycle operator moved towards his tricycle, picked up his phone and called Unyime Okon.

“When Okon came, he was dressed in his prison uniform. He called the tricycle operator and they discussed for about two minutes.

“Okon later called me and as I was about to stand up to meet him on the other side of the road, a man and a woman who were caring for us said I just had an accident and I could not be questioned.

“Out of annoyance, Okon crossed to the side of the road and came to me and started saying he called me but I refused to answer him. He said I don’t know who he is. All of a sudden, he brought out a dagger, stabbed me in the back and blood started gushing out of my body.”

Idip said he collapsed after losing a lot of blood, adding that sympathisers rushed him to a private hospital for treatment.

“The man and the woman caring for me tried to apprehend Okon, but he threatened to stab them if they touched him. So, he entered his car and drove off. But because I already lost a lot of blood, I collapsed and was rushed to the Majesty Hospital, where I was operated on.

“The people at the scene of the accident apprehended the tricycle operator and took him to the Traffic Unit, Division A on Barracks Road, where the case was reported. I gathered that both Okon and Moses work at the Uyo Custodial Centre on Barracks Road. I want them arrested and charged,” he added.