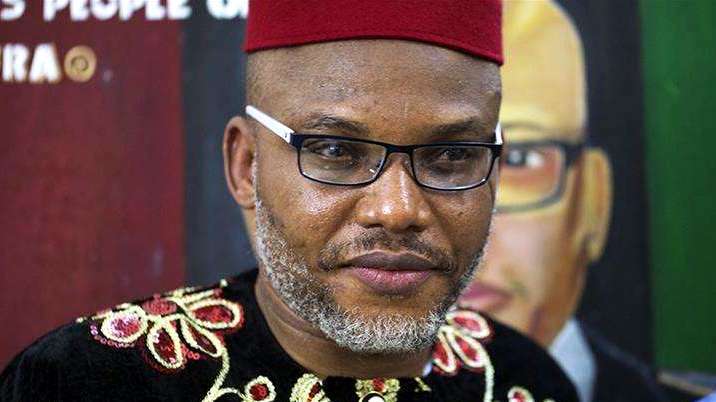 Leader of the Indigenous People of Biafra (IPOB), Nnamdi Kanu has said those planning to hold five-day sit-at-home in the Southeast are not his followers.
According to him, anybody trying to impose a 5-day sit-at-him in the Southeast at this particular time do not wish him well.
This comes after breakaway IPOB leader, Simon Ekpa, a Finland-based self-acclaimed disciple of Kanu, had in a viral clip asked residents to stay home for five days.
But Kanu, in a message relayed by his lawyer, Ifeanyi Ejiofor, who visited him on Tuesday at the Department of State Services (DSS) custody in Abuja, urged Ndigbo to resist the directive.
Ejiofor, in a statement, said Kanu warned all criminal elements in the region to refrain from inflicting pain on the people in the guise of self-determination.
Kanu believes it was wrong to deny the people the same fundamental rights he and IPOB were fighting for.
The statement said: “Our people shall vehemently resist, and must not allow any form of criminality to overshadow or becloud their legitimate and internationally-sanctioned aspiration for a peaceful nation of their own, devoid of any forms of violence and intimidation.
“Any person who obeys or enforces any unsanctioned sit-at-home instructions…should count himself or herself as the Number 1 enemy of Onyendu and our peace-loving people.
“Consequently, such persons must be aware of the grave and dire consequences that lie ahead of them for such criminal acts.
“Onyendu unequivocally stated that he has not ordered any sit-at-home.
“He directs that all our people should go about their normal life and businesses without let or hindrance, so as not to destroy the socio-economic life of our people, which have become the envy of all.”
It faulted the Tony Blair Institute for Global Change, which warned that the elections are under threat of serious disruption from violence caused by Boko Haram, IPOB and criminal gangs known as ‘bandits’.
IPOB, in a statement by its Publicity Secretary, Emma Powerful, said it had never attacked any Independent National Electoral Commission (INEC) facility “nor do we have any plans in the future to carry out such attacks”.
Also yesterday, the Movement for the Actualisation of the Sovereign State of Biafra (MASSOB) condemned the sit-at-home directive by Ekpa.
The group, in a statement by its National Director of Information, Edeson Samuel, urged the people to ignore it.
The statement reads in part: “How can someone who claimed to be fighting for the freedom of his people at the same time turn around and kill, and destroy the economy of the same people he is fighting for?
“MASSOB is urging Ndigbo to ignore the treat and go about their normal business.”
Also, Igbo youths under the auspices of Ohanaeze Ndigbo Youth Council (OYC) Worldwide, asked Ndigbo to resist a full reign of terror being sponsored by enemies.
Its National President, Mazi Okwu Nnabuike, wondered how any right-thinking person would ask people to sit at home for five consecutive days at a time economic challenges were biting harder.
The group urged Southeast residents to ignore what he called “a baseless and senseless order”.
Anambra State government described as fake news speculations that markets would be shut on December 20.
Addressing market chairmen and secretaries at the Secretariat of the Anambra State Markets Amalgamated Traders’ Association (ASMATA), Onitsha, Chief of Staff to the State Government, Chief Ernest Ezeajughi, urged the traders to disregard the rumour.
He said: “Don’t mind the enemies of progress. How can we close markets at this critical time that we are about to celebrate Christmas and New year?
“It is the period we make sales, so don’t mind the saboteurs.
“The sit-at-home is fake news. Even IPOB has cleared the air that it was fake news.
“To have sit-at-home from 9th to 14th of December is not possible.”
Top Stories