According to him, despite the fact that polygamy has been demonized married men are still unfaithful and most girls are still single. 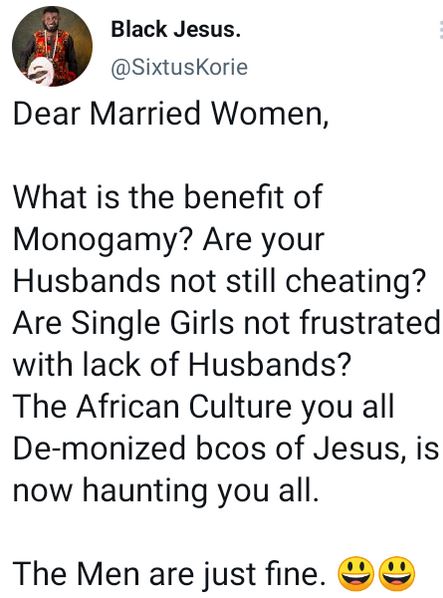 A Nigerian Twitter user with the username, Black Jesus, has taken to the microblogging platform to state that men are losing their lives to prostrate cancer because ''Christianity demonizes polygamy.''

He stated that polygamy was never meant to demonise women and made men live longer in the past.

According to him, despite the fact that polygamy has been demonized married men are still unfaithful and most girls are still single.

He tweeted this on Wednesday, December 2022, while addressing women who said they hate polygamy.

"Hanty, hope you know Polygamy wasn't practiced to Humiliate Women. Our Grand Mothers enjoyed it, infact it made their Husbands live up to 150 yrs old. Christianity demonized Polygamy and that's why our Men now die with Prostate Cancer. Our Forefathers were Wise," he wrote. 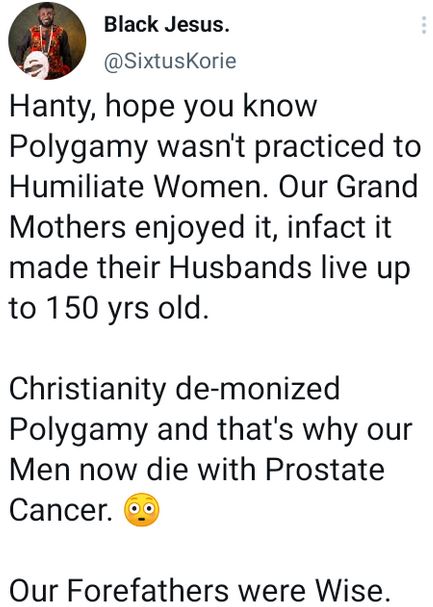 Continuing on Thursday December 8, he tweeted:

"Hanty you hate Polygamy but if #Ronaldo or #Messi chats you up to be their Side Chick, you will offer thanksgiving to the Lord. You will even change your name from Adanma to Ada-Zion or Ada-Football.  You will also edit your Profile to... "A Small Girl With Big God"