Yes, They Are Our Workers – INEC Reacts To Viral Video Of Staff Copying Information On PVCs


The video sparked various reactions from netizens, with many people alleging that the video shows the commission plans to rig the 2023 elections. 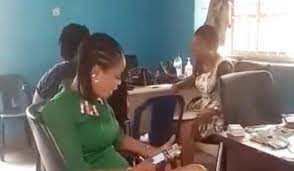 The Independent National Electoral Commission (INEC) has reacted to a viral video of its staff copying information of permanent voter cards (PVCs) to their phones in Lagos.
Responding to the video which sparked various reactions from netizens, INEC said it was aware of the video.
Many people had alleged that the video shows the commission plans to rig the 2023 elections.
However, speaking via a statement on Wednesday, the electoral body debunked claims that it’s workers were stealing voters information from PVCs.
INEC national commissioner, Festus Okoye, said the commission was aware of the video.
Confirming that the persons in the video were INEC staff at an office of the commission in Festac, Amuwo Odofin LGA in Lagos, Okoye explained that the staff were harvesting voter information numbers (VINs) from PVCs as part of an inventory process for older, uncollected cards.
According to him, “In its determination to enhance the rate of collection of PVCs, the Commission decided to establish a PVC collection process that includes an online component.
“The procedure entails that registered voters with access to the Internet could go to a dedicated portal to ascertain whether their PVCs are ready and to find their locations for subsequent collection.
“All they are required to do is to provide their details such as name, date of birth, state of registration or the last six digits of the VINs that they provided/received during registration, to locate their cards.”
Okoye explained that this would improve the PVC collection process.
He, however, said that the VINS from the newer PVCs, whose registration took place between January and July 2022, were automatically harvested.
“A major threat to the upcoming general election comes from fake news and disinformation. The Commission appeals to Nigerians to remain conscious of this, even if the prior intention is worthy,” he added.
Top Stories