Atiku, while addressing PDP supporters at a rally at the Rwang Pam township stadium in Jos on Tuesday, suffered a gaffe which is unusual for the former Vice President. 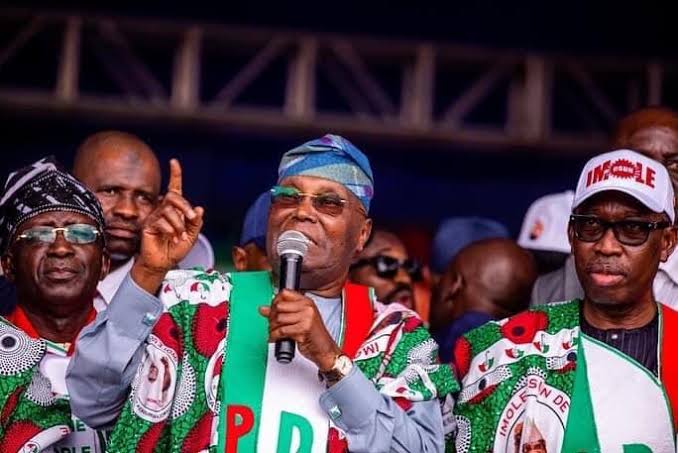 Nigerians have reacted after the Peoples Democratic Party (PDP) presidential candidate, Atiku Abubakar fumbled with words during the party's rally in Jos, Plateau State on Tuesday.
It happened that while addressing PDP supporters at a rally at the Rwang Pam township stadium in Jos on Tuesday, Atiku while concluding his speech in Hausa, Atiku said, “For God’s sake and for the value of this place, ensure that you vote for A… I mean PDP this time around.”
It is believed that he was trying to ask the people to support the ruling party which he dumped some years ago after helping Buhari defeat the PDP in 2015.
His gaffe comes weeks after a similar incident involving the APC presidential candidate, Bola Tinubu, which also occurred at the same stadium on Tuesday.
While addressing supporters at the Plateau rally, the APC presidential candidate said “God bless PD… APC”.
Following the development, some Nigerians took to social media to express their reactions to the gaffe suffered by the PDP flagbearer.
See some of the reactions online.
@AminuAbuzayd wrote: “@atiku said Plateau should vote for AP PDP today in Jos turn by turn. Let us see how the media house like @ARISEtv will take it.”
@Rega09831412 wrote: “He didn’t say anything beyond A… so there’s no proof he was going to say APC!”
@abdulra99412337 wrote: “So, him too he don turn to bulaba, so it’s high time we realize these two candidates are not worthy of our votes, it’s just like they’re been forced to the Nigerian citizens.”
@KingJibolausman wrote: “What goes round, must come round, they say Tinubu make a mistake in Jos, and Atiku make the same mistake in Jos also.”
@NassirAminu wrote: “See one smoke of lies that are appearing. 😂😂😂Does this happen when I was asleep or did they cover my eyes not to hear this part LIVE?”
@Femiotunba1 wrote: “Mistake is normal but armature like @BwalaDaniel and @emmaikumeh are the ones making political statements out of it.”
@Abubakarbularaf wrote: “They said Asiwaju lost memory then what Atiku what does he lose?”
@kennethokorie10 wrote: “For them it’s normal and part of human nature to make mistakes but for APC it’s old and memory loss…they don’t hide their hatred.”
@Emahnie4 wrote: “APC/PDP are two sides of a coin. Two evil party, same failure.”
@TinubuOclock wrote: “Atiku Abubakar endorsed APC in Jos today. We are grateful.”
@Oyeniran_Aby wrote: “He may have done it deliberately for people to talk about him also on SM, seeing that BAT’s own also made him popular and talked about since 😄.
“Ignore it, APC should focus on their campaign but can humor’ themselves sha. 😂😂😂
Top Stories