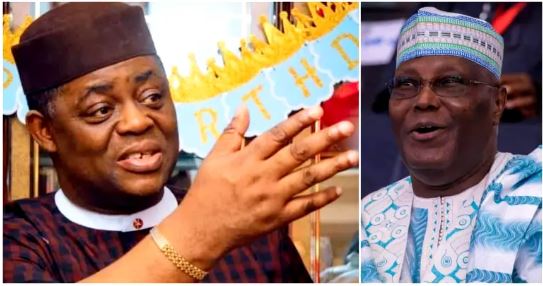 The presidential candidate of the People’s Democratic Party, PDP, Atiku Abubakar has been reportedly rushed to London for treatment after falling sick, according to the Director of Special Projects and New media of the Tinubu/Shettima presidential campaign Council, Chief Femi Fani-Kayode.
Fani-Kayode made this claim in a tweet via his verified Twitter handle on Sunday.
He tweeted, “Yet again Mr. Privatise Everything fell dangerously ill & ran to Dubai for a “stich it up” procedure. Watch how he walks & you will know what’s going on. Now he is on his way to the UK to beg British MP’s for their support. Must he bend the knee for the Brits too? Truly shameful.”
Meanwhile, the Atiku-Okowa Presidential Campaign Organisation has urged Nigerians to  disregard what it called  “the lies of unrepentant liars” against the Presidential candidate of the PDP, Atiku Abubakar who is currently in London.
The Campaign Office said Atiku is in London on the invitation of the Government of the United Kingdom.
Spokesperson and Director Public Affairs PDP Presidential Campaign Management Committee, Senator Dino Melaye,  in Abuja, on Sunday.
He said, “Atiku is 100% fit and in super form healthwise. The British Government invited the leading presidential candidate, Atiku Abubakar, just like they had invited Bola Tinubu and Peter Obi earlier.
“Nigerians should henceforth disregard drug induced statements propelled by Ikebe super like online medium.”
Top Stories