Buhari had led the APC campaign train to Adamawa, the home state of the Peoples Democratic Party (PDP), presidential candidate, Atiku Abubakar, to canvass support for the APC candidate. 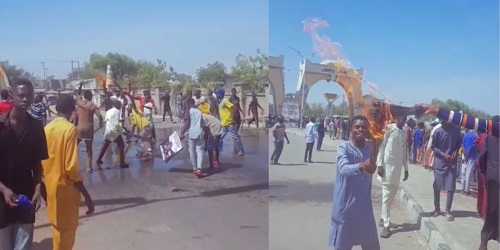 Residents of Adamawa state have rejected the All Progressives Congress after taking to the streets on Monday to wash off  wash off what they considered as President Muhammadu Buhari and All Progressives Congress (APC) presidential candidate, Bola Ahmed Tinubu's “stains” during their visit to the state.
This is according to a report by Sahara Reporters.
The incident took place after Buhari had led the APC campaign train to Adamawa, the home state of the Peoples Democratic Party (PDP), presidential candidate, Atiku Abubakar, to canvass support for the APC candidate.
However, shortly thereafter, youths trooped to the street with buckets of water, washing off what they considered as stain of the APC leaders and also set brooms (APC symbols) on fire.
Earlier at the palace of the Lamido of Adamawa, when President Buhari visisted, the APC candidate, Tinubu, was conspicuously absent, prompting the president to explain that Tinubu's aircraft had developed a fault as reported by SaharaReporters.
SaharaReporters, had earlier reported that "The aircraft that was meant to convey the presidential candidate of the All Progressives Congress (APC), Bola Ahmed Tinubu to Adamawa state on Monday has developed a fault.
"Tinubu was scheduled to arrive at the Yola International Airport by 10 am on Monday to flag off his presidential campaign in the state."
Therefore, shortly after President Buhari's departure, youths took to the streets, especially at the strategic “Jippu Jam” roundabout, chanting “Nigeria, sai daddy (Atiku)” washing off the “stains” of APC and setting brooms to fire.
The videos of the incident were obtained by SaharaReporters showing how the youths “washed” their streets, saying they were cleaning off the stains of the APC campaign train led by Buhari.
Top Stories