Benita stated that she and Halima had no idea Suleman was a pastor because they assumed he worked in the oil and gas industry. 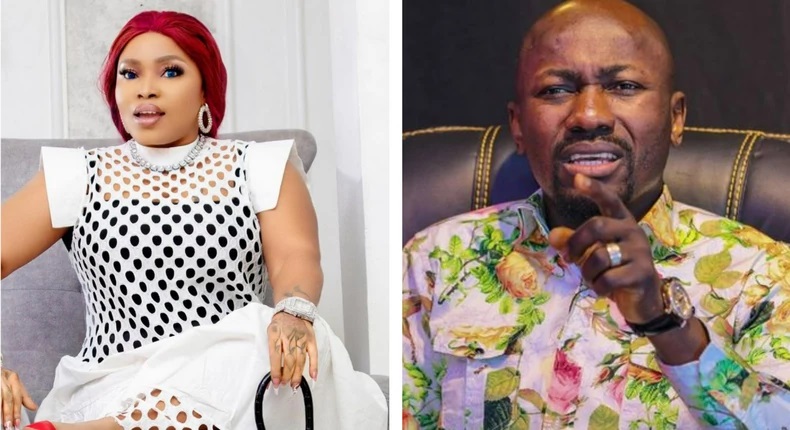 Halima Abubakar's best friend, Benita has confirmed that Apostle Johnson Suleman of Omega Fire Ministry dated the actress.
She made the statement in an interview with a social media blogger where she spilled some 'hot tea' about Halima’s relationship with the pastor.
Benita revealed that her friend had removed three pregnancies while in a relationship with Johnson, which sparked outrage among netizens.
The actress’s bestie, Benita, was on an Instagram live video with one of the social media bloggers, Temiola Sobola, where she disclosed what she knew about the relationship between the pastor and the actress.
Benita stated that she and Halima had no idea Suleman was a pastor because they assumed he worked in the oil and gas industry.
In Benita’s words: "Halima and I are best friends and I knew when she and Apostle Suleman were dating. We never knew he was a pastor, we thought he was into oil and gas. Halima aborted 3 pregnancies for him. After the third pregnancy, she started bleeding everyday. I used to follow her to her shows and events. We were always moving around with extra tampons to prevent her from getting stained. We don’t know if the bleeding was as a result of the ab*rtion, maybe her womb has been tampered with but when Suleman saw that her bleeding didn’t stop, he dumped her. I wanted to get a tattoo one day and she opted to follow me. That was the day she removed the tattoo of Suleman’s name she had on her hand, then I knew my friend has been heartbroken.”