According to Muhammad, she supported Buhari in 2015 blindfolded, not knowing that he would not fulfill his promises. 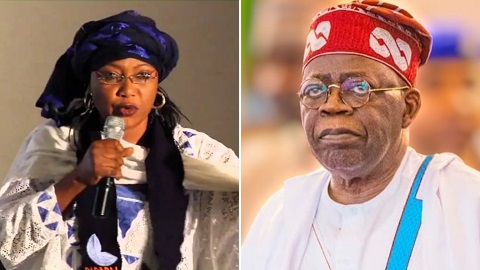 Najaatu Mohammad, a former chieftain of the All Progressives Congress (APC) has said she left the ruling party because she didn't want to repeat the same mistake she made while supporting President Muhammadu Buhari.
According to Muhammad, she blindly supported Buhari in 2015, not knowing that he would not fulfill his campaign promises.
She further stated that she would not repeat the same mistake with the presidential ambition of the former Governor of Lagos State.
Muhammad disclosed this in an interview on Trust TV’s Daily Politics.
She said, “I followed Buhari and millions of people followed Buhari because they thought he will change Nigeria for the better but we never gave him an agenda, we never gave him demands, we never had an agreement with him about what we wanted. So this time around we have to learn from experience.
“Buhari discarded all of his followers, he discarded every one of us. None of us was taken to the Villa. And all the promises he made concerning corruption, security, agriculture and giving Nigerians an enabling environment, he didn’t fulfil it.
“He is serving on the most corrupt government Nigeria has ever had, he pardoned some of the biggest thieves in Nigeria. You hear of billions stolen by a particular individual and the story goes under the carpet.
“Right now we are hearing of trillions, so what is he saying, he gives directives and counter directives are given, he has failed us, he has failed on his promises. Having said that, if I can make a mistake on Buhari I can not make another mistake on Asiwaju.”
Top Stories