Former Super Eagles Captain, Vincent Enyeama has continued to shine on the international stage as he is named in the list of top 10 goalkeepers in Europe. 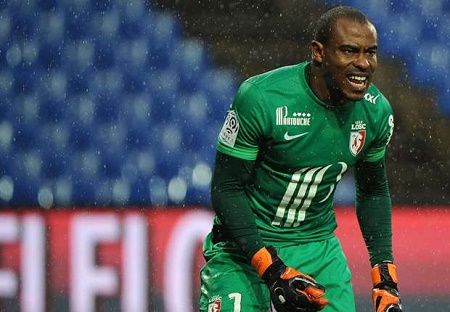 Former Super Eagles Captain, Vincent Enyeama
Former Nigeria goalkeeper Vincent Enyeama has been named among the top 10 goalkeepers in Europe for the 2015/16 season by the Swiss-based CIES Football Observatory.
The ranking was done taking into account the number of goals conceded per match, number of minutes per goal, number of passes per match, number of saves per match, number of saves per goal conceded and the percentage of saves.
The 33-year-old finished in sixth place behind illustrious goalkeepers like Manuel Neuer of Bayern Munich, Jan Oblak of Atletico Madrid, Gianluigi Buffon of Juventus, Kevin Trapp of PSG and Claudio Bravo of Barcelona.
Coming behind Enyeama on the list are Tottenham’s Hugo Lloris, Alphonse Areola of Villareal, Keylor Navas of Real Madrid and Pepe Reina of Napoli in the list of 10.
The Nigerian missed out on winning silverware with Lille this season as they lost 2-1 to PSG in Saturday’s French Cup final.
Enyeama’s illustrious international career came to an abrupt end last year when he announced his retirement after a publicized fall out with former Nigeria coach, Sunday Oliseh.
He earned a record 101 caps with the Super Eagles and won the 2013 Africa Cup of Nations title. 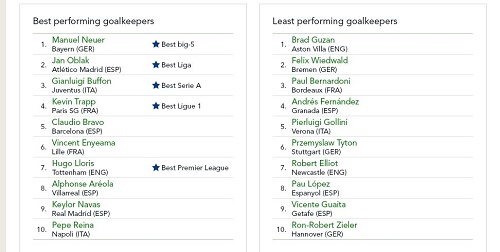