This is the faces of the deadly couple who kidnapped two reverend sisters in Ondo State including their driver. 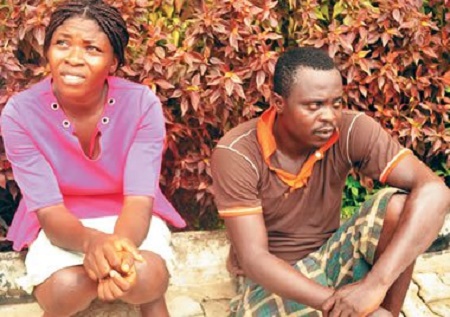 Adebimpe Muyijimi and husband Ayodeji Muyijimi who kidnapped two reverend sisters
This is the photo of the suspected couple who kidnapped two reverend sisters in Ondo State.
Tori News had reported on Tuesday, that the Ondo State Police Command arrested a couple, Ayodeji Muyijimi and Adebimpe Muyijimi for allegedly participating in the kidnap of two Reverend Sisters, Perpetual Apo and Bukola Funmilade, and their driver, Mr. Zwugwa Zibai.
Speaking on the arrest of the couple, the Commissioner of Police for the Ondo State Command, Mrs Hilda Harrison, who disclosed that the suspects had participated in a series of kidnappings in the state in recent times, said the couple was arrested in Okitipupa town in Okitipupa Local Government Area of the state.
She added they had confessed to the commission of the crime, and that they would be arraigned in court as soon as the police concluded investigation on the matter.
Top Stories