A 23-year-old student Faatimah Knight has raised $30,000 (about N6 million in Nigerian currency) to help rebuild black churches destroyed by fire in the United States of America. 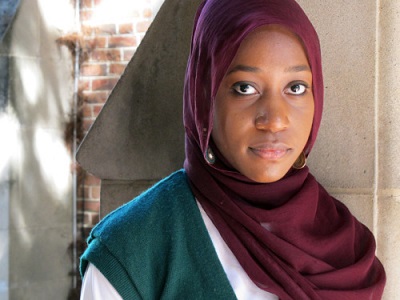 Faatimah Knight
As religious tolerance is advocated to be the key to peace in the world by world leaders, a 23-year old female muslim student, Faatimah Knight has led the campaign with an inspirational and admirable feat. She reportedly raised a sum of $30,000 (about N6m) to help rebuild black churches destroyed by fire. The funds were raised to assist in the rennovation of about 7 churches affected by the Charleston shooting in the United States.
When Knight, a Masters student at the Chicago Theological Seminary, started the unique #RespondWithLove Ramadan project with her friends, she did not know how much they would be able to raise.

Now they have $30,000 and she told The Independent that distributing the money is the next step.
“We have been overwhelmed by how generous people have been,”

“We will figure out how to distribute the money”, Knight said.

According to Knight, the remarkable observation from the donation exercise is that people praticising other religions donated money to support the rebuilding cause regardless of their religious beliefs. She has also been questioned by her muslim friends who believe she should be dedicated to a muslim cause. She defended herself by maiking reference to the teachings of Islam on the need to protect the weak and vulnerable. She claimed black people have been vulnerable over time which aroused her desire to support them.

In an interview with the BBC, she said the #RespondWithLove project was a way to show that they were concerned about the plight of the Black community.

"We wanted to show that as a Muslim community, their pain did not go unnoticed by us—that we did, if fact, feel deeply for their loss," she said.

"We hope that these churches might stand tall again as a testament to the power of human goodness over human vileness and to one day be a place where God's name is oft-remembered."
Top Stories

Media Mogul, Mo Abudu Shares New Photos Of Herself With Her Adorable Grandsons As She Turns 58

Five Side Effects Of Energy Drink

Why I Fell Out With Tinubu — Atiku Opens Up
Recent Stories