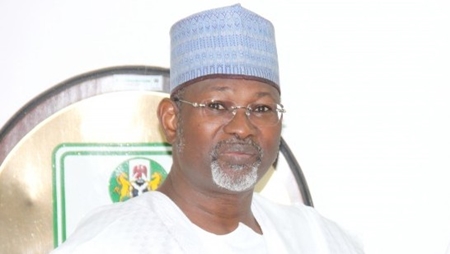 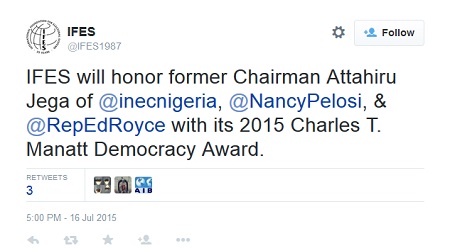 In recognition of his expert management in the 2015 general elections, which positioned him as a credible election administrator, The International Foundation for Electoral Systems (IFES) has honoured former INEC boss, Prof. Attahiru Jega with the prestigious 2015 Charles Manatt Democracy Award.
A statement issued by the IFES CEO, Bill Sweeney said; “Chairman Jega’s leadership was instrumental to Nigeria’s successful general elections in 2015. He deserves full credit for his efforts to increase the credibility and transparency of the electoral process under extreme logistical challenges, such as terrorist threats from Boko Haram, where failure could prove the catalyst for predicted election violence.”
In his response, Prof. Jega said; “I am deeply honoured to accept the 2015 Democracy Award from the IFES. INEC’s long-standing partnership with the IFES in preparation for the 2015 general elections resulted in a credible process accepted by Nigerian citizens and the international community. These elections have put Nigeria on the right path toward democratic stability.”
He will receive the award at a ceremony in Washington DC on September 29th, 2015, alongside the US House Democratic Leader, Nancy Pelosi and Congressman Ed Royce.