There was commotion at a police station in Ondo state after a policeman reportedly shot dead a senior colleague during an argument. 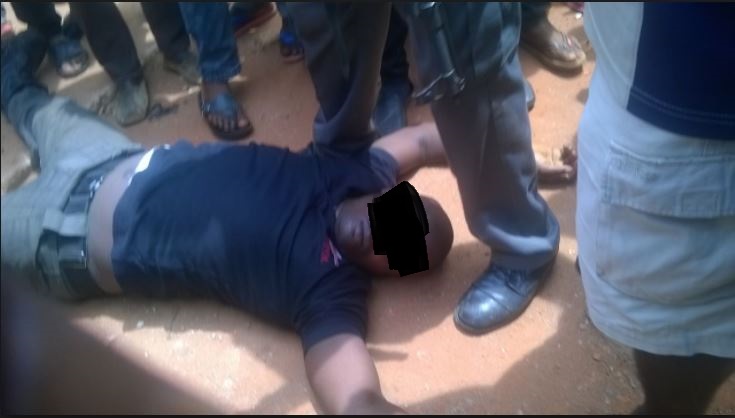 Police officer shot dead (File photo)
A policeman, identified as Abraham Arowogun attached to the Kajola Divisional Police Station, Kajola town in Odigbo Local Government Area of Ondo State has committed suicide by jumping into a deep well in the police station.
The mysterious incident happened on Tuesday at the divisional police station in the state. The deceased, who was an inspector before his death, had earlier shot one of his senior colleagues, Timothy Aruehi dead.
Arowogun shot Aruehi, who was a Divisional Crime Officer, following a disagreement that ensued between them on the issue of money.
The source explained, “There was an issue that happened between the two officers. Arowogun was investigating a case and the DCO, Aruehi, discovered that a sum of N150,000 was involved in the case he (Arowogun) was investigating and that Arowogun actually converted that money to his private purse.
“The DCO called him and asked him questions. Why he did what he did? In the course of interrogating him, he just went out angrily and brought out a gun and shot Timothy dead.”
The police source added that after killing the DCO, other officers in the station at the time fled for safety.
“After doing that, he knew that what he did was unprofessional and unpardonable in the police force, he just left the scene jumped into a well at the back of the station,” the source stated.
The corpses of the two policemen were said to have been deposited at the mortuary in the Ondo State General Hospital, Ore.
When contacted, the Public Relations Officer of the command, Mr. Femi Joseph, confirmed the incident and said the command had commenced an investigation on the matter.
“It is an unfortunate incident but we have begun investigation on it, the command is very saddened by the incident and our heart are very heavy, we are doing everything possible to further dig into the matter and also to talk to our officers and men on the need to avert similar occurrence,” the PPRO stated.
Top Stories