A female NYSC member who was listening to music with an ear phone has been reportedly knocked down by a moving train. 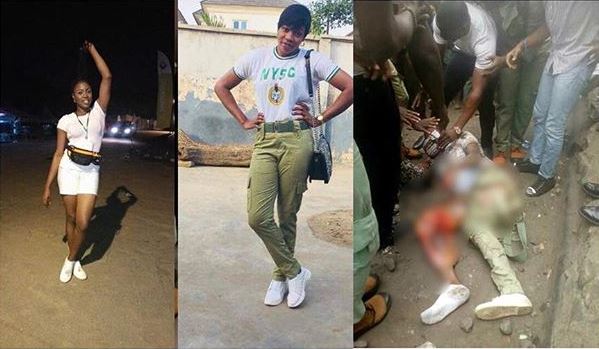 The female corper knocked down by a moving train in Lagos (Photo:Instablog)
There was pandemonium in Ikeja area of Lagos state after a female member of the National Youth Service Corps (NYSC) was yesterday knocked down by a moving train in Ikeja area of Lagos State.
The sad incident attracted the attention of people along the railway line.
Revealing how the incident happened, an eye witness said: “the train was not moving at a high speed. People tried to call her attention to the incoming train but she didn’t yield to the call as she continued pressing her mobile phone”.
The eywitness further stated, “I was looking at her from where I stood and saw her with an ear piece plugged into her ears which made her unable to hear the sound of the incoming train. Many passers-by tried to pull her out of the rail line but she ran towards the moving train which crushed parts of her body”.
She was later rushed to the hospital for medical attention by some people.
According to Leadership Newspaper, the name of the female corps member and the hospital where she was taken to was kept secret by officials of the National Youth Service Corps (NYSC).
Top Stories