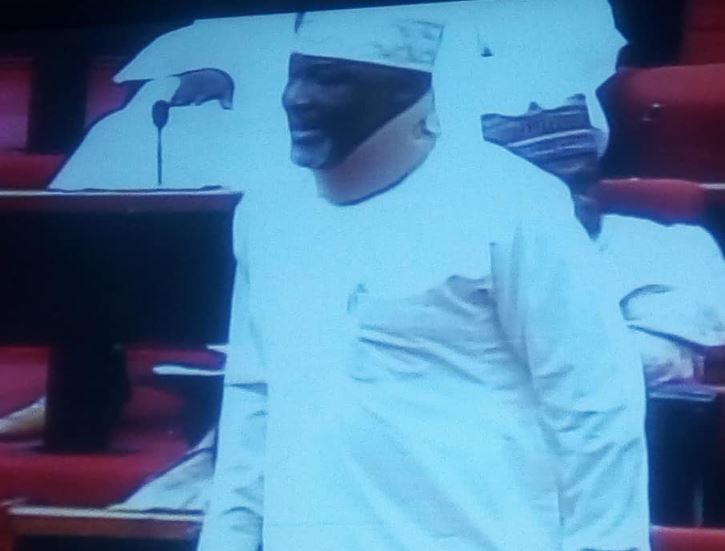 Senator Dino Melaye at the senate
According to a report by TVC News, Senator Dino Melaye on Wednesday resumed for legislative duties at Senate plenary where he technically defected to the opposition Peoples Democratic Party by relocating from the aisle of the ruling All Progressives Congress to that of the PDP without formally mentioning it but insisting that he would no longer sit among APC Senators.
Senator Melaye who wore a neck collar Plaster of Paris (POP), accused the police of trying to kill him twice through a chemical substance and injection hence he was asking Senate President Bukola Saraki to permit him to relocate from his assigned seat and henceforth sit on the aisle of the opposition PDP precisely close to former Senate President, Senator David Mark
He had earlier thanked the Peoples Democratic Party and others of helping him during his calamity but remained silent on the ruling party, the APC which he remained a member until today.
But Senate Majority Leader, Senator Ahmad Lawan was quick to reject that a seat be given to Dino on the aisle of the opposition insisting that a seat be given to him on the aisle occupied by ruling APC members.
Senate Chief Whip, Senator Olusola Adeyeye rejected the request to transfer Senator Dino to the opposition's aisle noting that it would be setting a bad precedence.
Senate President Bukola Saraki, amidst laughter by colleagues, later insisted that as long as he is concerned, Senator Melaye remains a member of the ruling party and that he could only be temporarily allowed to seat among the opposition for now while efforts are made to make his assigned seat comfortable.
Saraki insisted that Senator Dino had not defected but that he was only permitting a temporary change of seat to ensure that the lawmaker is comfortable before he recovers from his trauma.
Senator Dino was then accompanied by PDP senators who supported him with his walking stick to relocate to the aisle of the opposition.
There are only two political parties in the Eight Senate, the ruling APC and opposition PDP. While the APC occupies the aisle on the right-hand of the Senate chamber, the opposition PDP occupies the aisle on the left-hand of the Senate President in line with parliamentary protocols.
Top Stories