There was serious pandemonium in Adekunle Ajasin University after operatives of the Special Anti-Robbery Squad in Ondo state invaded the school hostel. 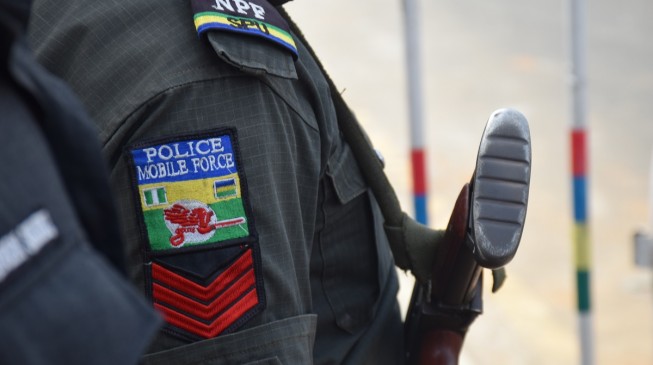 Nigeria police
Some men of the Ondo State Police Command attached to the Special Anti-Robbery Squad, on Monday, allegedly invaded a hostel of the Adekunle Ajasin University, Akungba Akoko, Ondo State, and beat some of the students of the institution met in the hostel, Punch has reported.
The shocking incident reportedly happened at about 4 a.m when they were ending a party they organised, with many of them suffering injuries of various degrees following the alleged brutalisation by the Police.
One of the students, who spoke on condition of anonymity, told Punch that the policemen invaded the hostel in a commando-like manner without any respect for the privacy of the students.
He said the policemen told them that they were searching for cult members in the hostel.
“The incident happened around 4 a.m after the students finished their hostel party. The operatives stormed the hostel as if they were going to war. They broke the doors, burglaries and ceilings to gain entrance. When they arrived, the students initially did not open the door for them, thinking they were armed robbers. That was how they started breaking the doors to enter.
“When they entered, they started beating everybody. Many students were mercilessly beaten. But some students who gave them bribe were released while those who couldn’t bribe them were whisked away by the officers,” he said.
When contacted, the Police Public Relations Officer of the command, Mr. Femi Joseph, who confirmed the incident, said the Commissioner of Police, Mr. Gbenga Adeyanju, had ordered the investigation of the matter.
Joseph stated, “Three students that were arrested had been released and the CP has ordered full investigation. After the investigation, if the policemen are found culpable, they will definitely pay for it, we don’t allow indiscipline in this command. I also want to use this medium to call on any student who was brutalised to come to my office with evidence and I promise we won’t spare any officer found culpable.”
Top Stories