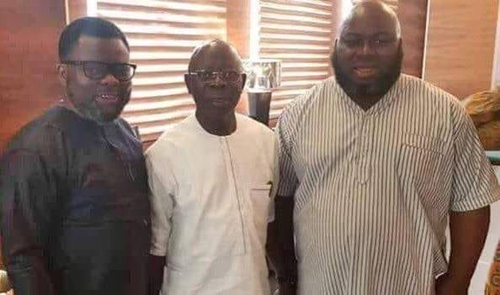 Comrade Adams, Asari Dokubo during the visit
A Facebook user identified as Chukwu Ebegbulem has taken to the social networking platform last weekend to reveal that a former militant warlord in the Niger Delta creeks, Alhaji Mujahideen Asari-Dokubo, has paid a visit to the new inaugurated national chairman of the APC, Comrade Adams Oshiomhole.
The visit by the major political figure of the Ijaw ethnic group to the chairman of the ruling party, has raised eyebrows as the ex-militant leader was a staunch supporter of opposition leader and former president, Dr Goodluck Jonathan.
Chukwu who shared picture of the visit wrote; “Asari Dokubo on a courtesy visit to my comrade, Adams Aliu Oshiomhole recently. This is why I love my comrade. Asari dokubo about to port to APC. Picture speaks for itself! Believe! “This is a serious political statement. Ignore this at your own peril.”
The details of the high-profile visit were not ascertained by TORI News as at the time of filing this report.
Top Stories