The Shiite Muslim leader, Ibrahim El-Zakzaky, and his wife Zeenat, are currently appearing at the Kaduna state High Court amid heavy security. 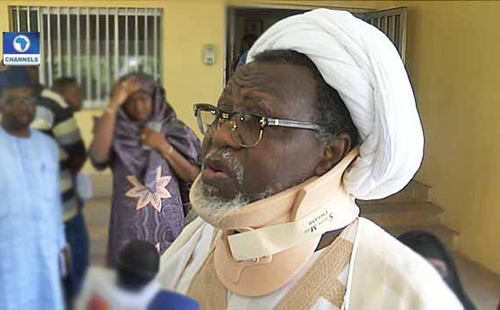 Ibrahim El-Zakzaky addresses reporters in Abuja in January 2018.
The leader of the Islamic Movement of Nigeria (IMN), Sheikh Ibrahim El-Zakzaky, and his wife, Zeenat, on Wednesday, arrived at the Kaduna State High Court for arraignment amid tight security.
Ahead of their arraignment, men of the Kaduna State Police Command blocked all the roads leading to the court, diverting vehicles to alternative routes.
According to Channels TV, the move is to avert any breakdown of law and order by the Shiite group whose members have been carrying out series of protests in Kaduna and Abuja, to demand their leader’s release.
Residents going to their places of work as well as students whose schools are located near the court have to trek to their various destinations due to the diversion of traffic in the area. 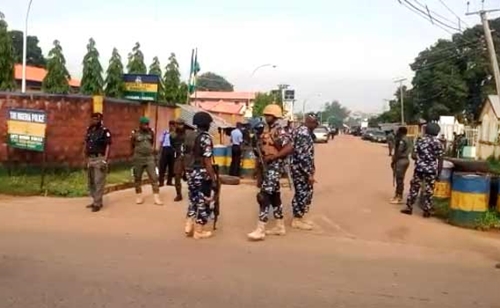 Police officers beef up security at the Kaduna State High Court during the arrangement of Ibrahim El-Zakzaky on July 11, 2018.
El-Zakzaky is being arraigned with his wife, Zeenat, by the Kaduna State Government before the State High Court.
The duo are charged with eight counts bordering on culpable homicide, unlawful assembly, and disturbance of public peace, among other allegations.
Meanwhile, police have cautioned members of the Shiite group against embarking on any form of unauthorised procession or protest.
In a statement on Tuesday, they warned that the command would not hesitate to deal decisively with any person or group of persons who deliberately attempt to violate the ban on unlawful assembly in the state.
The police also adviced residents in the state capital to go about their businesses without fear.
They assured the people that adequate security measures have been put in place to ensure a hitch-free arraignment of the Shiite leader.
Top Stories