12-Year-Old Girl, Two Others Shot As Violence Erupts In Osogbo


A mere 12-year-old girl and two other persons have been shot as serious violence erupts in Osogbo in the aftermath of the inconclusive Osun gubernatorial elections. 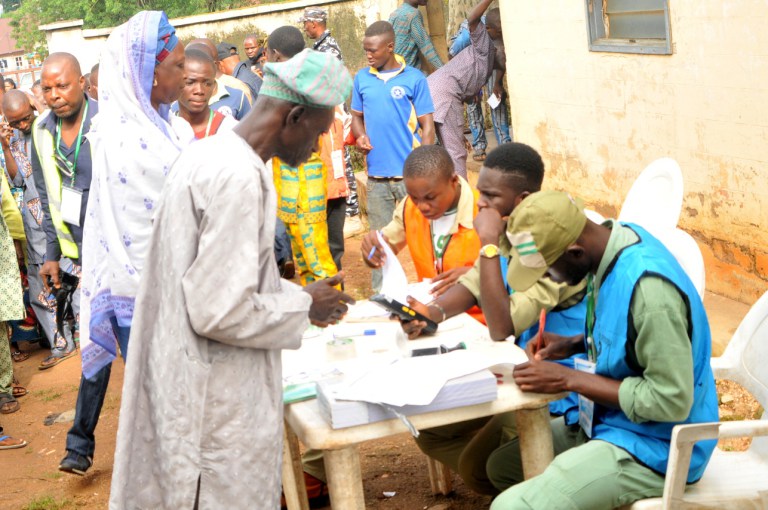 File photo of an elderly voter being accredited, at Sekonanear Ife, during the 2018 Osun state Governorship
Election on Saturday (22/9/18). 05010/23/9/18/Timothy Adeogodiran/JAU/NAN
According to Premium Times, heavy gunshots rang out between the police and suspected political thugs in Alekuwodo neighbourhood of Osogbo on Monday afternoon, amidst battle for the control of one of the five polling units where re-run election is scheduled to hold on Thursday.
A 12-year-old girl and two men who were not involved in the violence sustained gunshot wounds, Premium Times learnt from witnesses and medical personnel who attended to the victims.
Dorcas Abioye’s elder sister told Premium Times she was hit on the thigh by a stray police bullet while sitting outside their mother’s shop on Akinlade Street.
She received treatment at an undisclosed hospital in Osogbo. She was discharged around 3:30 p.m. Monday but was asked to come back on Tuesday for further medical examination.
“We just finished eating in my shop, I asked her to throw out the water we used to wash our hands and then she started screaming that she had been shot,” her mother, Titilayo Abioye, told Premium Times.
The two men who were also shot were rushed to Morning Star Hospital in Alekuwodo at 12:59 p.m. They were immediately treated and discharged, hospital staff said.
The violence erupted at about 12:30 p.m. when suspected All Progressives Congress loyalists trailed a Peoples Democratic Party chieftain to the neighbourhood.
Fatai Diekola, a political operative of the PDP in Osogbo, was in Alekuwodo to mobilise party supporters to Ademola Adeleke’s house for a meeting.
Those selected for the trip were largely from Ward 5, Osogbo Local Government Area, in which Polling Unit 17 is domiciled.
Witnesses said Mr Diekola was trailed to the neighborhood and mobbed by suspected APC thugs as he was rallying PDP members to proceed on their journey to Ede.
“They followed him to this area because they have been targeting him before,” said Olufunke Akinwale, whose variety store faces the polling unit. “They came to cause trouble.”
Residents immediately alerted the police and Civil Defence, who arrived in separate contingents and opened fire in the air to disperse the mob and quell the ensuing confrontation.
Police commissioner Adeoye Famihan and state police spokesperson both did not return request for comments from PREMIUM TIMES for several hours Monday.
The Polling Unit 17 on Adewale Street, off Akinlade Street in Alekuwodo, has the potential to sway the hotly-contested governorship election in Osun State.
Both the APC and the PDP have intensified the battle for its 884 registered voters since it was identified as one of the seven polling units across the state where a re-run will be held Thursday to finally determine a winner in the September 22 election.
The Independent National Electoral Commission (INEC) said the seven polling units have a combined 3,498 registered voters. They are located in Osogbo, Orolu, Ife North and Ife South Local Government Areas.
The electoral body declared the election inconclusive and ordered a re-run after Mr Adeleke scored 254,698 votes against 254, 345 for Gboyega Oyetola of the APC, leaving a margin of 353 votes.
Both campaigns have commenced a large-scale lobbying for votes across the five LGAs where a re-run was ordered in the 30-LGA state’s gubernatorial race to replace incumbent Rauf Aregbesola.
Mr Diekola was reportedly a member of the APC until this year, when he fell out with the party and decided to align his political influence with Mr Adeleke, who now enjoys a 353 votes margin ahead of the re-run.
Olawale Rasheed, a spokesperson for Mr Adeleke’s campaign, said Mr Diekola was under attack because of his formidable political influence across Osogbo especially in Ward 5.
“He is a very strong leader in Osogbo, but they have arrested him now as they are arresting our leaders across the state,” Mr Rasheed said. “Our party leaders in Orolu and Ife are also being arrested in a bid to cut down our chances on Thursday.”
Jamiu Olawunmi, a spokesperson for Mr Oyetola did not return request for comments from Premium Times for several hours on Monday.
Top Stories