A community in Cross River State has been plunged into mourning after heavy rain killed a mere JSS 2 student in the area. 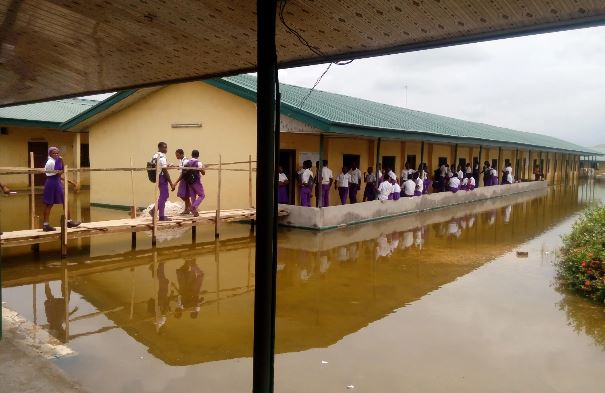 File photo: Daily Post
According to a report by Daily Post, an 11-year-old student of Government Science Secondary School, Mayne Avenue in Calabar South LGA of Cross River State, Victor Charles has been swept away by torrential rain in  Calabar.
The incident occurred on Wednesday when the victim was swept into a flooded water channel at Mayne Avenue by Atamunu/Atakpa in Calabar.
According to an eyewitness, who gave his name as Anthony Akpan, the deceased was in Junior Secondary School 2 (JSS2) class.
“The incident occurred during the heavy downpour at about 2: 00pm when heavy rain swept the deceased into the big gutter at Mayne Avenue by Atakpa Street and his body has remained missing,” he said.
He stated that the current of the flood was too heavy when Charles and some of his colleagues were coming back from school.
“The tragedy happened just by my place here, the water that comes from the big gutter is quite heavy and the boys were just standing by my workshop and all of a sudden the victim fell into the small gutter in front of my workshop before the water carried him into the big channel at Atakpa.
“The big channel usually overflows anytime the rain is heavy due to the amount of debris people pour into it and it was unfortunate that it happened again. This is not the first time someone is drowning in that place.
“The place needs to be worked on, the sand inside that gutter need to be evacuated, when you look at the road the water from the big channel has caused terrible erosion in that place something needs to be done now,” he said.
When Daily Post correspondent visited the school later in the afternoon, teachers and students were all in a sober mood, as they lamented that they could not believe that little Victor was gone.
One of his classmates, Blessed Ekpo said Victor was a like-able person because of his social and friendly lifestyle, “We all like him, because he is a very smart and friendly person.
“We didn’t know what happened to him, that he fell into the big gutter and drowned. We will miss him, because we will never see him again.”
The father of the deceased, who did not want his name in print, disclosed that his son Victor was yet to be found.
“Me and some of my brothers have been searching the big gutter for his body since the early hours of today but we have not seen his corpse even as we speak.
“I have another search team at the evacuation point of the channel near CRUTECH and adjourning community but we have not made any success yet because the rain started again this evening.
“I want to use this opportunity to appeal to members of the public that anyone who finds him should please contact the school so that he can be buried properly because I cannot  rest till I find my boy,” the bereaved father said.
Top Stories