APGA Accuses PDP Of Being Behind Abia INEC Office Fire


Director-General of the group, Mr Max Nduaguibe, made the accusation just as the PDP dismissed the claims as a lie. 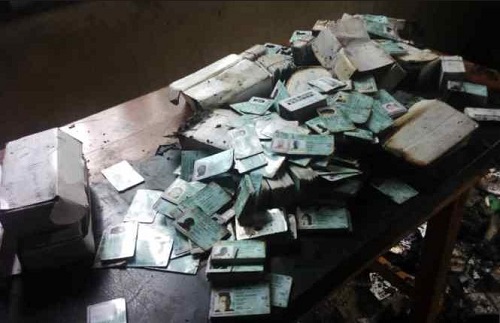 Many PVCs burnt in the fire that razed INEC office in Abia
The campaign organisation of Chief Alex Otti, the All Progressive Grand Alliance governorship candidate in Abia State, has condemned the burning of the Independent National Electoral Commission’s office in the Umu-Ikaa Isiala Ngwa South Local Government Area.

The Director-General of the group, Mr Max Nduaguibe, in a statement on Monday in Umuahia, the state capital, alleged that agents of the Peoples Democratic Party in the state were responsible for the act.

Nduaguibe made the accusation just as the PDP dismissed the claims as a lie.

Nduaguibe said, “We view the razing of the new INEC office as the continuation of the regime of brigandage, intimidation and impunity by the PDP-led government in Abia State.

But the state PDP, through its Publicity Secretary, Don Ubani said the PDP had no reason to burn the INEC office as the area was a stronghold of the party.

He said, “It shows that APGA is not ready for the election and looking for excuses because it will lose the election.”
Top Stories