It was gathered that the murder had sparked confusion and a protest by the youths of the area, who moved immediate to the police station after the incident. 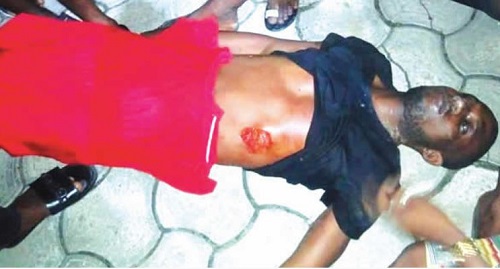 Victim, Nyebuchi Ihunwo
There was confusion in Atali community under Obio/Akpor Local Government Area of Rivers State over the alleged killing of a 20-year-old man, Nyebuchi Ihunwo, by a policeman.

Ihunwo was reportedly stabbed to death by one Inspector Chinedu attached to Elimgbu Police Station close to Atali.

The victim, it was learnt, was stabbed in the stomach while trying to purchase roasted plantain and fish by the roadside at about 8:20pm on Thursday.

Our correspondent gathered that Ihunwo’s murder had sparked confusion and a protest by the youths of the area, who moved immediate to the police station after the incident.

Speaking on the tragedy, the Eze Risiohia of Atali, Theophilus Ejekwu, described Ihunwo, who was his cousin, as a peaceful man, adding that the victim was murdered by the police.

The monarch explained that the victim had insisted that he should tell him the offence he committed to warrant his being arrested, adding that it was during the argument that one of the policemen stabbed him with a knife.

Ejekwu said, “He (victim) wanted to know why they wanted to arrest him but they told him that he would know when he gets to the police station; and he said he was hungry and was buying what to eat.

“He also said he was not going to follow them when he did not know what his offence was.

“So, they (policemen) pounced on him and as they dragged him, they stripped him naked; people were there watching.

“The policemen are attached to Elimgbu Division. The boy had no knife; the boy had no gun, no stick, but the policeman brought out a knife from his side and stabbed him.

“The boy, being a very peaceful man, started running to the police station, which is near us and on his way, he died because of the bleeding.”

He disclosed that the police also shot at three of the protesting youths after the gruesome murder.

Identifying the injured youths as Precious Gladstone, Chibueze Amaehule and Toruchi Ezekiel, the traditional ruler disclosed that they were currently receiving treatment at a hospital with one of them billed to undergo surgery.

He said, “Nyebuchi was murdered by Police Inspector Chinedu. The youths decided to protest and to know whether he had died. On arrival there, police shot at them and wounded Precious Gladstone; he is also a cousin to me.

“Other persons injured are Chibueze Amaehule and Toruchi Ezekiel; they are lying critically ill in the hospital now. The elders and members of my council went to see the Divisional Police Officer at Elimgbu to find out the details of what happened before death occurred.”

However, the Rivers State Police Command dismissed the claim that the police killed Ihunwo, adding that youths from Atali community numbering about 100, broke and fell the perimeter fence at the back of Elimgbu Police Station where an apartment belonging to one Sergeant Israel Sunday was set ablaze.

The Command’s position contained in a statement signed by the State Commissioner of Police, Usman Belel, indicated that the youths were trying to attack Elimgbu Police Station before they were stopped by security agents.

“The matter that gave rise to this incident is that men of the IGP Monitoring Unit investigating a case of kidnapping, with the aid of technical intelligence, tracked the identified suspects to Atali Community.

“On arrival, the team identified their targets and immediately arrested them. While they were taking them to Elimgbu Police Station, the suspects raised the alarm and started chanting cult slogans, which attracted members of their gang and youths of the community, who immediately swooped on the police, attacked, overpowered and rescued the two suspects who were in handcuffs.

“In the scuffle that ensued, a police sergeant was seriously assaulted and injuries inflicted on him which led to the rescue of the arrested suspects.

“Seeing that they have been overpowered, the police beat a fast retreat and went for re-enforcement.

“Consequently, when the rampaging cultists/youths sighted the police re-enforcement, they mobilised again in their numbers and one of them with a knife attacked ASP Chukwuma Onuora and as he was to stab him, he defended himself and while they were struggling with the knife. The boy had a cut on his stomach. The same youths took him to the hospital where he later died,” Belel said in the statement.

Shops remained closed in Atali community on Friday when our correspondent visited the area while there was a heavy presence of policemen in the area.
-PUNCH
Top Stories