The European Union has been urged to reduce the number of visa it issues to Nigerians. 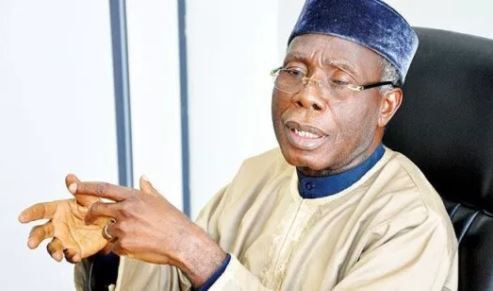 Audu Ogbeh
Chief Audu Ogbeh, the Minister of Agriculture and Rural Development, has appealed for support from the European Union Mission in reducing the spate of youths’ migration to the union’s member countries.
Ogbeh gave the appeal in an interview with newsmen at the end of the monthly meeting of Heads of Missions of European Union member countries in Abuja on Tuesday, NAN reports.
The minister, who said that youths’ migration was not sustainable, disclosed that a joint committee would be set up to advance the programme.
According to him, rather than youths going out, the FG wants them to come back and invest in agriculture.
“We met today to explore areas of support for agriculture, agro-industrial growth and put forward the European Union proposal for partnership and enhanced support.
“We also looked at the possibility of their private sector investors coming into Nigeria to play a part.
“We also raised the issue of migration of our youths across to Europe and the fact that it is not sustainable.
“It is something that Nigeria will like to see come to an end by creating economic activities here to make sure that young people stay back at home.
“The response of the European Union was very encouraging.
“We want to set up a joint committee that can advance this programme because rather than youths going out, we want them to come back and invest in agriculture.
“We are also lucky that Nigerian youths are interested in agriculture, different from youths in other countries. Even those who studied other courses are interested in agriculture.
“We did raise the issue of kidnapping of investors here, we do not want any Nigerian or foreigner investing here to be kidnapped and taken away,’’ Ogbeh said.
On the exportation of agriculture produce to the EU, he said the government would also partner with the quality control departments of the union to avoid exportation of contaminated and harmful agriculture produce.
Ogbeh said that issues dealing with value addition, livestock production, training, seeds improvement, training, Economic Partnership for Africa (EPA) were also discussed during the meeting.
“The EU are asking us to lay areas where we want them to participate like value addition, livestock production, training, seed improvement, training, Economic Partnership for Africa which has not been resolved,” he said.
Mr Richard Young, the Deputy Head of EU Delegation, said that challenges and opportunities in the agriculture sector in Nigeria were discussed at the meeting.
Young noted that the meeting with Ogbeh also discussed the ease of doing business between the Nigeria and the EU.
On lifting the ban on Nigerian dry beans by the EU, he said, “I think the issue of the beans has to do with the phyto-sanitary standards and that will be sorted out in due cause but this depends on the improvement of the quality of the beans to meet the standards that we require.
“There are many challenges in the agriculture sector but also there are vast opportunities.
“We were very concerned to focus on the role of the private sector and how private sector investment can contribute to enhancing production in the agriculture sector,” the EU deputy head said.
-NAN
Top Stories