Nigerian actress, Sonia Nwankwo has spoken about how she lost roles to s*xual harassment in the early days of her career. 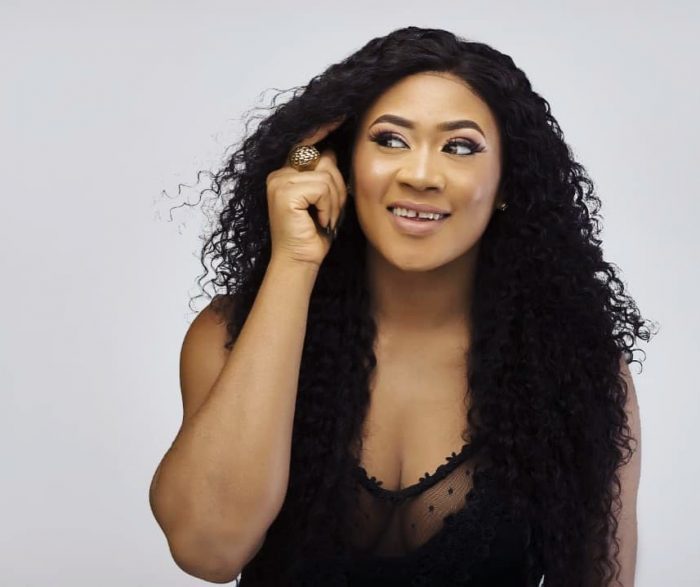 Sonia Nwankwo
Sonia Nwankwo, better known as Sonifoxy is a starlet with amazing singing and acting prowess. Though burgeoning, her vast talents stands her out in a crowd. In this interview, the Anambra State born lady spoke about the challenges of a Nigerian actress, plans to jet out to Texas, USA for The African Film Festival, relationship and lots more.
Would you tell us more about yourself?
My name is Nwankwo Sonia Adaobi Aka Sonifoxy. I’m a singer and actress. I’m from Abagana in Njikoka LGA in Anambra State.
I have been in the movie industry since 2011 after I registered as AGN (Actors Guild Of Nigeria) member.
Can you also share some of the songs and movies done?
They are quite a lot but let me recount a few; Cry of the Motherless , Joy of my Destiny, My Mother’s Wish, Where I belong, Dear my beloved , Against my Blood, Mary the Hunter, Sorrows and Tears , King of the Vultures, Blind Mother, and so many others.
And the songs I released are; Suspender in May 2018 and Obimo in November, 2018.
Which is the most challenging movie you have done among the ones listed?
I have played so many challenging roles, but one of them I can never forget in a hurry is on the set of Against my Blood, which is an
epic movie. There were times where we had to sleep in the bush and I was heavily stung by insects and I fell very sick for almost two weeks after leaving that movie set.
How did your journey into the movie industry begin? Did you have plans for it?
Entertainment has always been a thing for me right from when I was very little. I used to be in a Debate and Dramatic Society in school then called DDS. While I was in the University I used to travel to different states during ASUU strike to learn more about movies and participate too.
Aside acting what else do you do?
Aside acting and singing, I also own a farm.
Who are those you admire in the entertainment industry?
I admire a lot of people especially the women. One of the people that inspired me growing up is Stephanie Okereke. I remember wanting to act like her. I also admire Patience Ozokwor (Mama G), Ini Edo, Genevieve Nnaji too. There is so much I still learn from them.
Who’s your entertainer crush?
Well, I love a lot of Nigeria entertainers due to the fact that we are taking it by force , but I think when it comes to crushing on anyone, I would just go for David Adeleke popularly known as Davido.
Can you marry him, if he ask you to?
I think he is in a serious relationship which is very much visible.
But what if, your path crosses?
If it’s in my destiny, why not? I will marry him all over.
So you can marry a younger lover? Does age matter to you in relationship?
Age is nothing but a number, if a younger lover will make me happier and content, so be it.
What do you look out for in a man?
My ideal man would be very patient , loving, understanding and above all Godfearing.
How about his pocket and other physical features?
Those other things can be worked towards. They are not primary.
What’s next for you? Is there any new project you’re working on?
Musically yes, I’m working on a song that I’ll be performing at The African Film Festival in Dallas Texas, USA, where I have been invited to be part of the Workshop and also perform live.
How does your man cope with your busy schedules?
I don’t have a serious man yet, but before I do I’ll get to let him know my schedule and see if he can deal with it.
How supportive are your parents of your chosen career?
At first they weren’t supportive at all especially my dad. But when they saw the outcome of my jobs they are beginning to fall in line. My mum is my biggest fan now, she even goes as far as watching my movies and downloading my songs even before I inform her.
Have you encountered sexual harassment in the industry, even at your early stage?
Everybody has, but I think the way you handle it is what matters. When I started I remember losing a lot of roles all because I refused to play some dirty games, but I’m glad now that my talent is gradually subduing the sexual harassments.
Do you watch your movies to see your flaws?
Yes I do, I criticize myself a lot and try to be better.
How do you improve on them?
I try to be open to criticism as much as I know it hurts, and I also watch my role models who have been there before me and learn from them.
What’s your unique selling point?
I really don’t even know my selling point , all I try to do is better myself everyday.
How do you deal with male fans?
I love all my fans dearly because they have brought me this far and still going. As for my male fans, I love them too but sometimes some of them try to cross boundaries. However, I know how to handle them without being offensive. My male fans are the best ever.
***
Source: NewTelegraph
Top Stories