Angry students of Adekunle Ajasin University have shut down the school following a hike in their school fees. 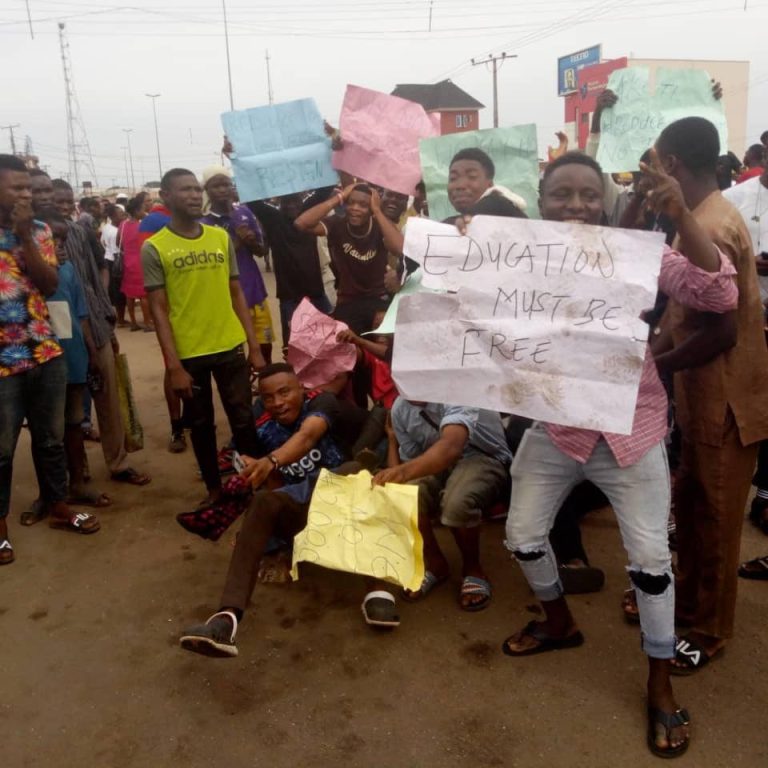 Students protesting the hike
Social and commercial activities were paralysed in parts of Akure, the Ondo State capital when a student of the State-owned tertiary institutions went on the rampage over the hike in school fees by the management of the institutions.
The students across tertiary who congregated at the popular Oba Adesida/ Oyemekun demanded the reduction of their school fees.
The students from the Adekunle Ajasin University Akungba Akoko (AAUA) and the State University of Science and Technology(OSUSTECH) Okitipupa have disrupted the free flow of traffic while the protest lasted.
Both AAUA and OSUSTECH had been under lock and key since April following a series of protests on campus over hike in the school fees by the management.
Throughout the period of the protest, vehicular movement and commercial activities were paralyzed.
It was observed that some of the students were seen playing football along the road, while others sing solidarity songs.
The students carried different placards with inscription such as; ‘No Reduction, No Resumption’; ‘Akeredolu Reduce or Resign’; Education Must Be Free’; ‘ Say No To N250,000 ‘
The President of the AAUA student union, Mr Samuel Adesomoju who spoke with reporters said the protest would continue until Governor Oluwarotimi Akeredolu reduce the fees.
Adesomoju maintained that the current fees of N250,000 which was increased last year has not brought any infrastructural development to institutions in the state.
His words ”We are here this morning to make our demand known once again.
”We are telling Governor Akeredolu that our school fees must be reduced now because there will be no resumption unless the fees are reduced.

”It is our right to have education but the governor is gradually taking it away from us with his policies. 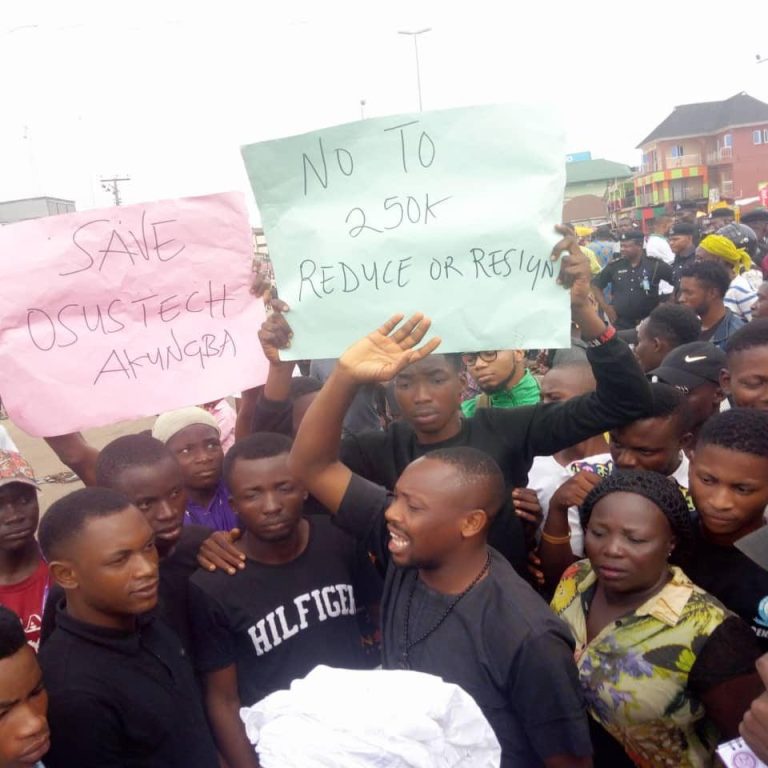 ”If the governor wants to generate revenue, he should look elsewhere not our Schools.
”We are sending him a clear message today that, we will not leave this road until he reduces the fees and he should not have in mind to open the schools without reduction. We are going to resist it.
”You can see we are here but not the governor’s office because he(Akeredolu) has said he will flush us out if we dare protest.”
Also speaking, a former NANS JCC chairman, Kowe Odunayo criticised the governor for the increased in school fees, adding that they would resist all means by the government to commercialized education in the State.
His words: ”Education is our right and we are here fighting for it. We want to put it to Governor Akeredolu that if he does not reduce the fees, there will not b reduction, he should know that.
” We read during his time in the university, if their chicken was not enough, they fought for chicken not school fees. Unfortunately, these set of people who enjoyed those things then cannot provide education.”
Addressing the protesting students in his palace, the Deji of Akure, Oba Ogunlade Aladetoyinbo Aladelusi commended the students for conducting themselves in a peaceful manner during the protest.
He said education is their right and must be made affordable to everyone in society no matter the financial situations in the country.
The monarch who spoke through his Chief of Staff, Prince Toyin Aladetoyinbo assured the students that he would take their grievances to the governor towards reducing the school fees.
Top Stories