All four newly appointed emirs by the Governor of Kano, Abdullahi Ganduje have been asked to resign 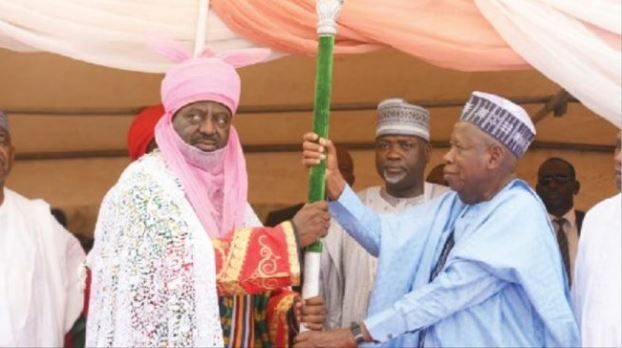 Governor Ganduje presenting staff of office to an emir
At least 22 civil society organisations have called on the newly appointed emirs in Kano state to resign, according to a report by TheCable.
The groups also called on Muhammadu Abubakar, sultan of Sokoto, to denounce the the additional emirates in Kano.
Abdullahi Ganduje, governor of the state, had appointed four new emirs in the state, an action believed to be political and targetted at Muhammadu Sanusi, emir of Kano, who reportedly worked against the governor’s reelection.
Speaking during a press conference, Abdulrahman Yola, a representative of the CSOs, asked Ganduje to concentrate on addressing the socio-economic and developmental challenges in the state.
“Kano State harbours more than two million Almajiris roaming the streets, without any tangible and sustainable intervention to checkmate the ugly situation,” Yola said.
“Kano takes the lead in substance and drug abuse, we have the highest number of school dropouts, the highest cases of congested classrooms in the country, with over 150 – 200 pupils in a class.
“Reliable statistics indicate more than three million, five hundred thousand unemployed youths in Kano, more than two million girl children who do not attend formal school in Kano, more than five million people who do not have access to potable drinking water and one of the states with the highest maternal mortality rate in Nigeria.
“And with all these challenges, the next solution is the creation of new emirates?”
Saida Sa’ad, another member of the coalition, accused the state assembly of violating legislative process and placing undue attention on an “unpopular bill”.
“We have Kano state security trust fund law bill unattended to in the last six years; violence against person prohibition law bill in the last 12 months; child rights act bill, 24 months; procurement law bill, six years; audit law bill; fiscal responsibility law bill and due process law bill,” she said.
“All are either with the house or governor without being given attention, only to pass a bill in less than 48 hours and the governor assented in less than 24 hours.
“Can we convince ourselves that the creation of additional emirate councils was done in good faith, and in the overall public interest and for genuine progress of the state?”
But in his reaction, Muhamamad Garba, the state’s commissioner for information, said the government’s action cannot be reversed.
He said the challenges confronting the state had been existing before the administration of Ganduje, saying the governor had empowered more than one million youths, including almajiris.
Top Stories

Tragedy As Four Dies, Others Injured As Truck Suffers Brake Failure And Rams Into A Car And Bikes In Oyo
Recent Stories