Disgruntled staff have reportedly locked down the Securities and Exchange Commission headquarters over moves to reinstate the suspended DG. 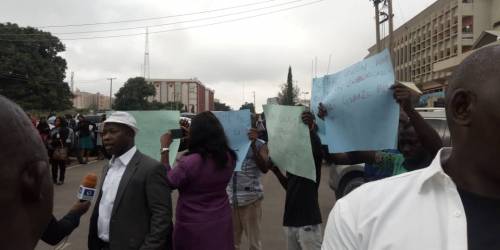 Photo credit: SaharaReporters
According to SaharaReporters, the Staff of the Securities and Exchange Commission (SEC) on Monday in Abuja morning locked up offices at the headquarters of the commission in Abuja to protest an attempt to reinstate the suspended Director-General, Mounir Gwarzo.
The placard-carrying workers under the umbrella of the Association of Senior Civil Servants of Nigeria locked and chained the gate of the building and vowed to resist the attempt to reinstate him.
The National Industrial Court, Abuja, had on Thursday ordered the immediate reinstatement of Mr Gwarzo to his position. 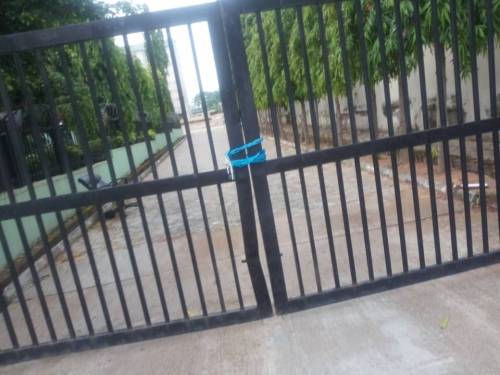 Justice Sanusi Kado, in his judgment, held that the minister of finance, named as the second defendant in the suit, lacked the power to suspend the claimant.
Justice Kado, who dismissed three issues raised by defence counsel through their preliminary objection, ruled that the suit was not status barred.
Gwarzo was indicted for abuse of office and corruption by an administrative panel of inquiry set up by the Federal Ministry of Finance headed by the permanent secretary, Dr. Mahmoud Isa-Dutse.
The House of Representatives' ad hoc committee which investigated his suspension by the former Minister of Finance, Kemi Adeosun, also indicted him.
Mrs. Adeosun resigned as a minister last September over allegations that she forged her National Youth Service Corps' (NYSC) certificate.
Top Stories