Another Looming Trouble: Why Nigerians Are Just In Love With Ponzi Schemes


Despite being seriously duped in times past, Nigerians have been found out to still be in love with ponzi schemes. 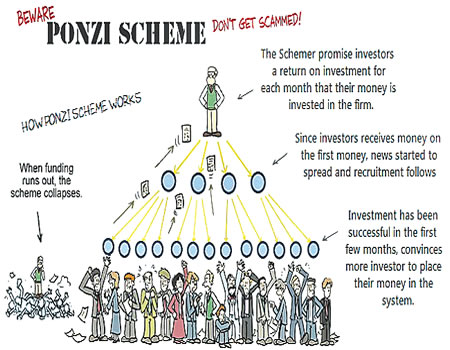 In the 1990s, Mavrodi Mondial Moneybox otherwise known as ÐœÐœÐœ, a Russian company founded by Sergey Mavrodi, Vyacheslav Mavrodi, and Olga Melnikova perpetrated one of the world’s largest Ponzi schemes of all time. According to Wikipedia between five and ten million people lost their savings to the scheme.
A Ponzi scheme also according to Wikipedia, is a form of fraud that lures investors and pays profits to earlier investors with funds from more recent investors.
Two years ago, Mrs Dolapo Adeoya, a Micro finance bank staff participated in the scheme. According to her she heard about MMM from her father in Lagos after the old man had unbelievably made huge profits from the little amount he invested in it.
“He told me he made four times what he invested and advised that I do same since that was what many people were doing in Lagos. I put in N10,000 and was paid N30,000 in four or six weeks, I can’t remember exactly.  I did it again with another N10,000 and made the same amount again. But I was skeptical because I remembered what happened to those who participated in Moneywise scheme in the early 2000.
“I was thinking of pulling out when my sister called me and said she was investing in MMM for the third time and advised that I should do same. I advised her not to invest all her profits, but she was adamant. She started with N8,000 and earned more than N20,000.
“She put her everything in it. On her second recoupment, she made almost N100,000. The guaranteed N600,000 was the attraction, but there is nothing really guaranteed in life. The whole house began to pray because deep inside, many of us had begun to query how this scheme actually worked and how it was sustained. Nobody knew,” she said.
Less than two weeks into the six weeks gestation period, MMM went under. Except for Mrs Adeoya, others close to her like her father and sister lost a lot of money to the scheme.
“I will never participate in such schemes again,” she told Sunday Tribune, saying that though a new ponzi scheme is catching fire, her sister and dad are not interested.
“We have all learnt our lessons in diverse ways. For me, Ponzis are scams. Schemes done on phones, to me, are fraudulent,” she said revealing that many Nigerians are now wiser and would rather approach a micro finance bank for a loan to do productive businesses.
What is wrong with Nigerians?
Unfortunately despite the disappointments that trailed MMM, many Nigerians are still rushing into another ponzi scheme. Sunday Tribune spoke with a cross section of sociologists and psychologists on why this is so.
Though experts, some of them are surprised that Nigerians could still go back to attempt something which brought them so much sorrow in the past.
Dr Andrew Adebayo, Chief Medical Director, Yaba Federal Neuro-psychiatric Hospital, Lagos giving a psychological dimension to the problem said: “It is not just a Nigerian problem; it is an endemic human problem.
“From the psychological point of view, it is a clear manifestation of greed, the human tendency to want to have and have – often without deploying the approximate amount of labour.
“When a human being sees a platform where they can invest their money in and within a short period of time get multiple folds in return an aspect of the human mind is provoked into almost ecstasy, that is, the greed region of the mind. Once the region of avarice has been pricked, one is almost always willing to play along with few questions asked.
“And the originators of this ponzi schemes understands this psychological programming in human beings. That is why most of the local ponzi schemes that people are engaged in are not always non-rewarding.
“The initiators play on people’s psychology and intelligence. The first few people enrolled in the scheme always get paid and get their monies doubled or tripled as the case maybe. And these ones will then become their advertisers.
“This is the same thing that happens with football betting. Sometimes, some people win. Few people get something out of it and this will stimulate them to invest more into it until they go into penury.
“Usually those who make huge money out these schemes are hardly up to 10 per cent of the bulk. The vast majority lose out. It is the same thing with the Ponzi scheme.
“The early bird enrollees get well paid and they are the ones who go about spreading the gospel to everyone that it is rewarding. They recruit more people to the scheme who then invest their money and never get paid.