After his scathing remarks, former All Progressives Congress Chairman, Chief John Odigie-Oyegun has been attacked by the party. 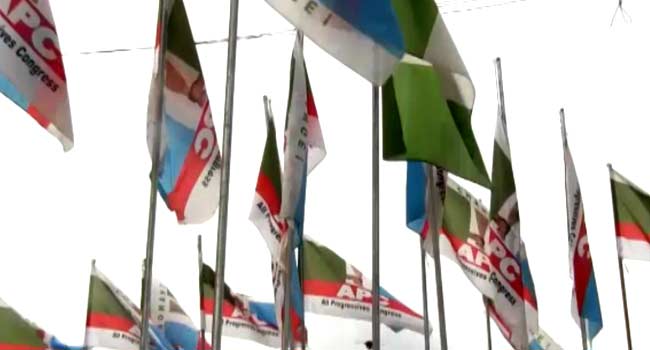 APC
The All Progressives Congress (APC) on Tuesday hit back at the immediate past National Chairman of the party, Chief John Odigie-Oyegun, saying is penchant for condoning indiscipline and the courage required to confront the pockets of political despots who could not operate by the party rules create the problems which the Oshiomhole led leadership is currently grappling with, TheNation has reported.
Reacting to a statement credited to the former Chairman accusing Oshiomhole of lacking the capacity to lead a political party, National Publicity Secretary of the party, Mallam Lanre Issa Onilu said that the resultant effect was widespread indiscipline across party ranks, lack of respect for party supremacy as witnessed in the 8th National Assembly leadership and its overall inability to align the varying interests of the legacy parties that came together to form the APC in 2014.
Onilu said that under the Oyegun leadership of the party, members merely saw the APC as a vehicle for acquiring political offices, stressing that the members who are not comfortable with the reforms going on in the party are free to join the PDP and other opposition parties.
“Let me agree that the NWC that led the party into the 2015 elections and continued till June 2018 did nothing different from what you would find in PDP. It was a period the party was seen as a mere vehicle to attain political office. The system accommodated impunity as certain members appeared to be superior to the party. Their interests were far more important than the collective interests of the APC, even when most times such interests are at variance with the ideals the party stand for.

“You would recall that it was under that leadership that some impudent members of APC called the bluff of the party by imposing themselves on the National Assembly as leaders contrary to the position of the party. Where was the party? Where was the discipline when this happened?
“It would be difficult to calculate what lack of courage to assert the party supremacy cost APC over that period. The consequences of the inaction of the party were unimaginable. We all saw the consequences on governance as the National assembly practically held our government to ransom.
“The impunity, which President Muhammadu Buhari has rightly described as lack of patriotism, constituted an unfortunate hindrance to the smooth running of government.
“The leadership under Chief Oyegun, with due respect to him, condoned all sorts of acts of indiscipline from certain members. It is not surprising that the current National Working Committee inherited such a huge mess, where the party was struggling to differentiate itself from the delinquent PDP.
“We all know that PDP was practically dead following the devastating defeat of 2015. The PDP bounced back not because the party has changed its insidious way or did anything different, but because APC did not live up to expectations.
“It goes without saying that when an organisation is unable to enforce its own rules, it would suffer the consequences sooner than later. We should not be ashamed to say that our party’s leadership under Chief Oyegun lacked the courage required to confront the pockets of political despots who could not operate by the party’s rules” Issa-Onilu said.
Speaking on the defeat suffered by the party in some states, Onilu, said there were peculiar issues in the respective states lost by the party that accounted for how the APC lost them rather than the voters preferring the Peoples Democratic Party (PDP).
He said “if Oyo, Imo, Bauchi, Adamawa and Zamfara States were taken one by one, it will be discovered that there were peculiar issues in the respective states that accounted for how the APC lost them rather than the voters preferring the Peoples Democratic Party (PDP).
“I would put the painful outcomes broadly under two reasons. One is indiscipline on the part of some members of our party in most of the states. The second reason is that the party leadership did not do much between 2015 and 2018 to move the party from being an amalgam of different political parties to become a truly blended progressive political party”, he said.
The APC spokesman said the next three years are very important as the APC under the leadership of the National Chairman, Comrade Adams Oshiomhole will continue to strengthen compliance with the rules, build support structures for democracy, ensures discipline across board, and deliver good governance for the benefits of all Nigerians.
“We expect members who have different agenda to join their kind in PDP. We will welcome with open arms, those who share our progressive ideals, so that by 2022, we will have a party whose members are truly progressives.”
On the letter written by Senator Lawal Shuaibu to the National Chairman, Onilu said what the Deputy National Chairman succeeded in doing was to portray members of the NWC as a bunch of cowards, adding that he was only looking for a scapegoat to pass on the blame following undesired results in his home Zamfara State.
He said “when he Senator Lawal Shuaibu alleged that the National Chairman is running the party like a sole administrator, does that mean the rest of us are incompetent? I doubt if he would have many members of the NWC supporting him in this.
“The ability to face up to the challenges and to take responsibility for mistakes are important qualities of a leader. If the NWC had taken any action that did not produce the desired result, it would be plain cowardice to look for a scapegoat or pass on the blame to another person.
“Since the Comrade Oshiomhole-led NWC came to office, we have been doing our best to institutionalise the best ideals of progressive politics. We understand that we must bring everyone under the fold of the party, where all of us would be subject to our party’s rules and conventions.
“We understand that impunity can provide temporary advantage and even successes. But ultimately, those successes would be short-lived. PDP is a living example of the inherent calamity of impunity. The PDP era brought calamity to the country and ultimately led to the loss of power. What I read from that letter is a call to continue along that trend. With due respect, that is not what APC stands for.” Issa-Onilu stated.
Responding to the APC allegations that he condoned indiscipline, Public Affairs Adviser to Oyegun, Ray Morphy dismissed the claims saying Oyegun ran he party without blemish until Oshiomhole came and destroyed everything, running the most fraudulent primaries in the history of world politics.
Morphy said the “Oshiomole Executive is about a year in office, why does he find it hard to function without looking for excuses and scape goats?
“It is common knowledge that Oshiomole ran the most fraudulent primaries in the history of politics in Nigeria. Recall that INEC said so when it adjudged Oshiomole primaries as the worst so far. The courts are saying the same thing today by upturning many APC primaries for being undemocratic and less than fair. Was it Oyegun who ran the primaries?

“Oyegun, an accomplished technocrat, a super permanent secretary, a former Governor, a man without blemish working with others cobbled together creditably the legacy parties, and held them together with tact, diplomacy and finesse until Oshiomole came along. To his credit, Oyegun did not lose one member of the party.
“As an elder, as a leader, Chief John Odigie Oyegun will not join issues with those who apparently are casting about looking for excuses for their inability to manage a ruling party successfully.
“Indeed it is absurd to lose states with all the capacity at the disposal of the current Chair. Party members know that APC witnessed its golden years under the chairmanship of Oyegun and no one can change that bit of political history.
“By the way, the vote increase to Mr President is a reflection of the confidence the people repose in the President despite the fumbles of the Oshiomole sole administratorship of the party.
“It will be recalled that Chief John Odigie Oyegun just received The Zik award for Political Leadership alongside John Mahama, the former President of Ghana. In the award citation, he was extolled for exemplary political leadership of APC. Posterity has already given its verdict, Oyegun led the party to resounding victory.
“Oshiomole should not destroy what others had laboured to build. If he needs tutorial on how to run a party, he should ask for it civilly. John Oyegun will be more than happy to help, after all, no man would like to see his son scatter what he had laboured to build.”
Top Stories