A chief and herbalist who are part of a robbery gang terrorizing many Ondo bank customers have been busted. 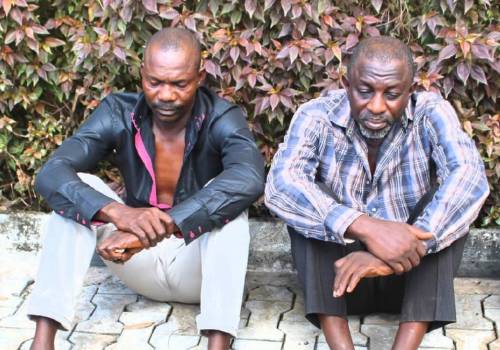 Chief, Herbalist arrested as being part of robbery gan
Two suspected members of a notorious robbery syndicate terrorising bank customers in Akure, Ondo State, have been apprehended, SaharaReporters reports.
The suspects, Adetoye Kolawole Martins and Lawrence Ojo Adebayo, were arrested following a robbery attack on a businessman in the state capital.
Martins, an herbalist and Adebayo, a local chief in Iju/Itaogbolu in Akure North Local Government Area, allegedly robbed one Adeyinka Adeniyi of N450,000.00 after the victim had made a withdrawal from a Zenith Bank's branch in Akure.
SaharaReporters gathered that the two men belonged to a notorious syndicate which had been attacking and robbing customers of some financial institutions in Akure.
Undie Adie, the Commissioner of Police in Ondo State paraded the suspects at the headquarters of the command before journalists.
Mr. Adie explained how the two men trailed their victim (Mr. Adeniyi) to a construction site and broke into his car and stole his money.
According to the police chief, the suspects are members of a gang that killed  Gabriel Kola Abiodun, a bursar with Anglican Church Diocese in Akure on April 4, 2019.
The police commissioner explained: "One Adeyinka Adeniyi went to the Zenith Bank, at the Alagbaka branch with his vehicle and withdrew the sum of N450,000.00. He kept the money in the safe of his car and drove to his building site at the Adegboola area of Akure, unknown to him that he was being trailed by suspected armed robbers.
"And when he came back, he found out that his car was broken into and the money carted away and Special Anti-Robbery Squad was promptly contacted. Detectives swung into action and arrested Martins Adetoye Kolawole and Lawrence Adebayo Ojo and upon interrogation, they confessed to the committing the crime."
He further said: "It is sad to say that this same gang was responsible for the death of Mr. Gabriel Abiodun, a bursar and verger with the Anglican Church Diocese in Akure recently."
The police chief also disclosed that the operational vehicles - Toyota Camry car with Reg. No JJ 752 EKY and Siena Bus with Reg. LSR 792 BE - which they always used to commit crimes and monitor their victims had been impounded.
Speaking with journalists, Adetoye said: "I was doing my herbalist job when Mr. Lawrence Adebayo introduced a member of the robbery gang to me. And his name is Gbenga but he is now on the run to avoid arrest from the police. Both of us were always behind the attack on customers of banks in the Alagbaka area of the state capital."
But Adebayo denied participating in any robberies of bank customers in the state.
"I am a chief at my town in Iju. How could I have engaged in such a crime as a public figure?" he said.
He added: "I only know this Adetoye through the Gbenga who is now on the run because we belonged to the same political organisation."
Top Stories