Jimi Agbaje, Ogunlewe, Others Returned To APC Where They Belong - Bode George


He said that Agbaje originally come from the APC and had been part of the ruling party in the state from the beginning. 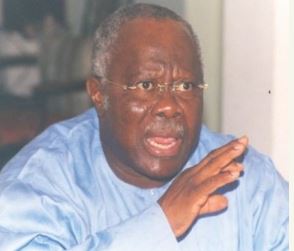 Chief Olabode George
Former National Vice Chairman of the Peoples Democratic Party, PDP, Chief Olabode George, has disclosed that the party’s governorship candidate in Lagos State in the last election, Jimi Agbaje, appears to have joined the All Progressives Congress, APC.
George also revealed that Agbaje failed in the last election because ‘he thinks he knows it all’, adding that it was Lagos people that worked against him.
He said that Agbaje originally come from the APC and had been part of the ruling party in the state from the beginning.
According to the PDP leader, any member of the party that wants to leave should go, adding that Sen. Adeseye Ogunlewe, who recently joined the APC, was a member of the Alliance for Democracy (AD), “so he simply moved back to where he came from.”
“Let them go. Some of them were good guys but now they are going to a place where they do not practice democracy at all. Those people who defected to the APC, from where did they originally come from? They came from APC,” the former Ondo State Military Administrator told Sun.
“Ogunlewe was a member of the Alliance for Democracy (AD), so he simply moved back to where he came from. They came from the APC.
“One of them came to my house and told me that the only business he does is to be a PSP operator and that a letter was written to him threatening to sack him; so because of his daily bread, he had to go back to APC.
“In the case of Dipo Olurunimu, his case was a different ball game. At a time, he was the only PDP member left in the Lagos State House of Assembly when others defected.
“But they were harassing him and he had to join them. APC is not a political party. Look at that Rita Orji she came around and got the ticket after that she started running around claiming to be the leader of the party in the state.
“The experience we have had in the South West is that there has been an unnecessary incursion of control over the affairs of the party from the national body.
“There has been interference in the management of the party in the South West and we met some days ago and decided that never again are we going to allow anybody outside of our zone to come and interfere in the affairs of the party.
“Let the leaders face national issues; you cannot know my house more than me. They were handpicking candidates and imposing them on us and we have seen the results, but we are determined that this would never happen again.
“Segun Adewale’s case is laughable; we need to pray for him, he is a very sick young man. The national body of the party has written that he is not a member of the party.
“If he says he is the chairman, I don’t know what party he is leading; but it is definitely not this PDP. We fought a good fight in the presidential election, we worked for Atiku and we are sure he won. But for Agbaje, he said he knows it all.
Top Stories