OAP, Kofi Bartel, allegedly attacked by SARS officers for speaking against their operations in Rivers State. 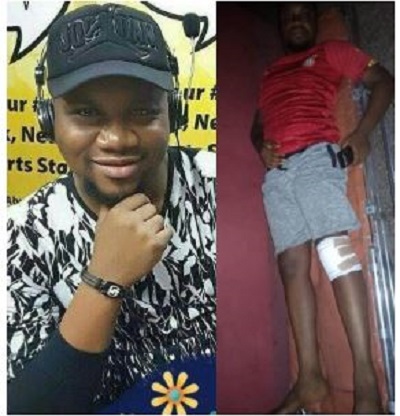 Posting via his Facebook page, Kofi stated that he was allegedly attacked and threatened to be killed for speaking against SARS operations during his programme on Radio. Recounting what led to the attack, Kofi wrote;

Yesterday, I was driving in my area and saw SARS officers beating up a boy who lives in the area. His mum fries Akara for a living and I knew immediately that they wouldn't be able to 'settle' the officers. He kept shouting "what have I done", while they tried to force him into their bus. They were beating the hell out of him and don't know if he would have survived. I made to go plead with them but at a point hesitated and chose to take a shot of the bus and numberplate.

I was given the beating of my life right on the road. They started by smashing my knees repeatedly with wooden bars. As I type this, my left knee is swollen and my right knee seriously bruised. I have pains on my head, neck and back.

I was handcuffed like a common criminal and shots were fired to disperse a small crowd that had gathered. After a second round of beating, I was taken to SARS HQ in Port Harcourt where I was beaten more mercilessly by the SARS officers who took me there. About three others also joined in. They are took turns to slap, punch, kick me all over my body in a detention room, while I was struggling with a swollen knee. At least 6 officers, one at a time. One swore he would have "wasted" me if his team were the one who picked me up. I was told to get ready to be thrown into their cell where I would receive the worst torture, including sexual abuse by male inmates. 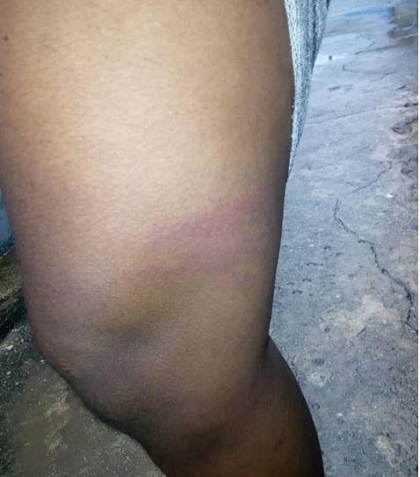 A couple of them told me to watch my back, saying this is my end in Rivers State, due to the human rights issues we treat on radio involving SARS and the police generally.

My phones were seized and I had no way of communicating with anyone. I was saved at the last minute when word got to their former boss and they were ordered to release me unconditionally.

The pains were unbearable last night and I'll have to go for a skull and knee Xray today.

Several times, I've had to use my media platform to shout on behalf of the voiceless in our society who have had their rights trampled upon by people meant to protect them. I got my own first hand experience yesterday. Some of the officers made me know how they felt about that.... literally.

So my crimes are;

1. Attempting to do something about the boy who was being beaten.

2. Taking up SARS and police issues on radio.

I'm taking their threats to my life seriously and will be putting authorities on notice. But please be aware, if anything happens to me or my family and friends, you know who to suspect.
Top Stories