The suspects were arrested in a bush at Umuhutte Ahiaeke Ibeku in the Umuahia North Local Government Area of the state during their initiation ceremony. 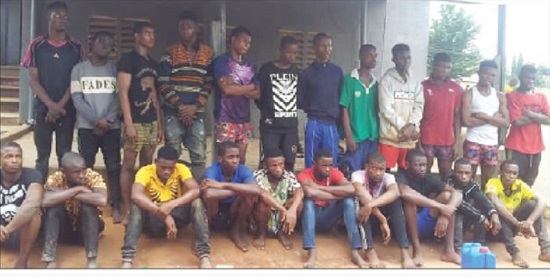 In a statement made available to Southern City News on Tuesday, the Police Public Relations Officer in the state, Mr Geoffrey Ogbonna, stated that the suspects were arrested by the cops acting on a tip-off.

Ogbonna said the suspects were members of the Neo Black Movement of Africa, also known as Aiye.

He added that the suspects were arrested in a bush at Umuhutte Ahiaeke Ibeku in the Umuahia North Local Government Area of the state during their initiation ceremony.

The statement read in part, “The suspects are university undergraduates, secondary school leavers/dropouts and artisans. They confessed that they were carrying out the initiation of their new members into the cult.

“Also, six expended cartridges and a damaged locally-made shotgun were recovered from them.”

The PPRO added that the suspects were assisting the police in apprehending their fleeing gang members.

He said the suspects would be charged to court at the end of investigation.
Top Stories