There seems to be no end in sight to the sit-in protest by the Flying Eagles, who have refused to leave Poland over unpaid wages by the Nigeria Football Federation. 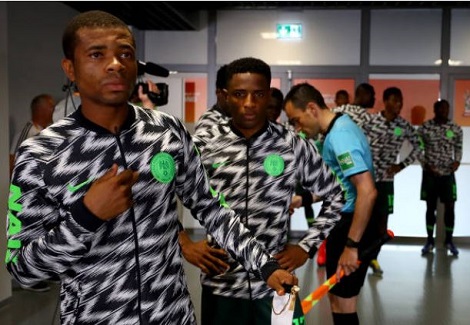 Flying Eagles
Nigeria’s Flying Eagles on Tuesday staged a protest over their unpaid match bonuses and allowances at the U-20 World Cup in Poland.

The Paul Aigbogun side crashed out of the tournament following their 2-1 loss to Senegal in the round of 16 at the Lodz stadium on Monday.

The PUNCH gathered after the game that the team were scheduled to travel back to Nigeria on Tuesday but refused to leave their hotel rooms until their outstanding bonuses were paid.

A player, who spoke on the condition of anonymity, said, “We did not get a dime from the NFF and only played the games for pride.

“It was a tough tournament for us but I must confess we tried our best,” he said.

“We were promised our bonuses but some of the players felt we might not get it, hence the protest.”

The PUNCH also learnt that after pleas from the officials of the team in Poland, the players agreed to fly to Warsaw, for their journey home on Tuesday.

It was also gathered that players based in England, Italy, Norway and Sweden were handed air tickets to return to their respective base, while the remaining players would return today.

This is not the first time a Nigerian team wil protest over unpaid bonuses at an international competition.

At the 2004 Africa Women’s Cup of Nations  in South Africa, the Super Falcons refused to board their flight home in protest over unpaid match bonuses, after winning the continental title.

Twelve years later, the Falcons embarked on another protest outside the National Assembly in Abuja over owed allowances following their record eighth triumph at the 2016 AWCON in Cameroon.

The team refused to leave their hotel in the capital city until they received their bonuses – $17,150 for each player.

The Super Eagles refused to train ahead of their round of 16 clash against France at the 2014 World Cup in Brazil following a dispute between officials and players over allowances.
Top Stories