A lawmaker has caused a stir after he brutally assaulted a traffic officer who arrested his wife over an offence. 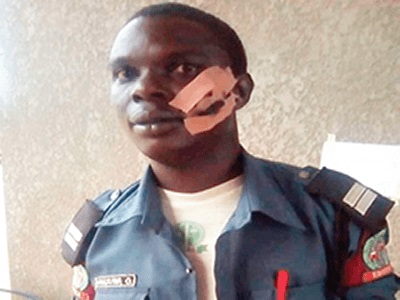 Osaretin Osazuwa
The Nigerian social media has been buzzing since Tuesday, following an altercation between a lawmaker representing Orhionmwon South constituency in the State House of Assembly, Honourable Roland Asoro and an official of the Edo State Traffic Management Agency (EDSTMA).
Asoro, miffed that a traffic officer, Osaretin Osazuwa, had the effrontery to arrest his wife for flouting traffic laws, marched to the office of the agency and slapped the Osazuwa twice, New Telegraph reports.
The lawmaker also kicked the officer in his private parts and allegedly tore his uniform. The wife was also alleged to have bitten Osazuwa.
The slapping drama was said to have happened in the presence of the Managing Director of the agency, Mr. Dennis Oloriegbe, who rather than react on behalf of his officer, only watched and did nothing.
The MD’s inaction, angered other members of the Agency, with many now threatening to embark on a protest against the MD.
Satisfied that he had registered his displeasure and anger, Asoro, located his wife’s impounded car and drove it away from the agency’s premises without paying a fine.
Trouble was said to have started after the lawmaker’s wife allegedly violated a traffic light. Officials of EDSTMA had impounded the car and taken it to their office. During the arrest, the traffic officials had recorded the drama between them and the lawmaker’s wife. The video had since gone viral. The woman, flagged for allegedly flouting traffic law, refused to step out of her car, thus causing heavy traffic jam.
She alerted her husband, who asked her to hand her phone to the arresting officer, but the traffic officials refused to collect the phone. In the midst of the heated argument, the woman zoomed off with Osazuwa in his car.
Osazuwa’s colleagues were shocked when Asoro stormed the agency’s head office and demanded to see the officer that arrested his wife. Osazuwa stepped out and right there in the presence of the MD, the lawmaker slapped the traffic officer twice and kicked him in his groin.
A source said: “We would have descended on Asoro and deal with him and his wife because what he did was beastly.
“This is not the first time his wife will be violating traffic rules. We used to allow her to go, but on that day, our men said enough was enough. The lawmaker gave the officer two slaps and a kick. He even came with a policeman and two other guys. Asoro’s wife beats the officer on his hand and face”.
Workers of the traffic agency have resolved to embark on a protest against their MD for failing to protect Osazuwa. However, members of the Edo State Civil Society Organisation (EDOSCO) have demanded for the arrest and prosecution of the lawmaker and his wife for attacking EDSTMA officer after violating traffic rules.
The EDOSCO spokesman, Osaze Edigin, said the wife of Asoro was not a government official and should not be driving government official car, which has official number plate. Edigin said: “The body has given 48-hours ultimatum to the MD of EDSTMA, to publicly show to Edo State people, receipt of payment in government coffers by the offender or we will begin resistance of further arrest of Edo people, who violate traffic rules. EDOSCO is also calling on the MD of EDSTMA to resign from his position for failure to act.
“Nobody is above the law. Moreso, this is coming from the wife of a lawmaker. We want to sound it loud and clear to the MD of EDSTMA, that if he fails to fine and prosecute the lawmaker and his wife for flouting traffic law and assaulting an official, he should resign. EDOSCO will be approaching the court to compel the agency to enforce the enabling law. Citizens are being taken to EDSTMA offices and made to pay fines when they flout traffic laws and regulations. We fail to see why the wife of the lawmaker, whose husband was part of those that made that law, should be allowed to disobey it.”
Top Stories