Many people have reportedly cheated death after a worship centre collapsed in a community in Asaba. 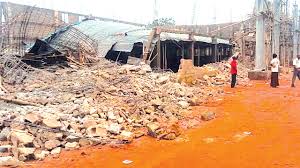 File photo
According to a report by Sun News, part of a storey building, which is also used as a worship centre, located along Anwai Road in Asaba, Delta State, collapsed at the wee hours on Friday to the chagrin of residents in the neighbourhood.
Fortunately, there were no human casualties, although the worth of property destroyed was yet to be ascertained as at the time of filing this report. The building which is said to be about 15 years old, served as a hotel before it just two years before it packed up.
A new-generation church is said to be using the fenced building as worship centre every Friday for vigil service, and on Sundays for the normal church service.
Narrating how the building collapsed, a resident in the area, Donatus Opukeme, said he heard a shattering noise at about 3am, and “I wondered who could have been carrying some corrugated sheets at that time of the night.
“The next I heard was an earth-shaking noise. When I peeped through my window, I saw dust everywhere. My vehicle was covered with dust, and at dawn, we discovered that the building which was abandoned had fallen.”
Opukeme said nobody knew what could have led to the collapse, but stated that the building had been lying fallow before the church move in recently.
He added that there were issues of inheritance of the property after the death of the original owner of the house.
When Sun News visited the area, the gate to the building was locked with a group of people inside the compound, apparently reviewing the incident.
A security guard at the gate of the house refused to let our correspondent in, but summon one Moses Nwandu who claimed to be a structural engineer.
Nwandu who spoke from within the compound, claimed that the building was not structurally defective, adding that they were carrying out renovation when one of their amateur engineers inadvertently touched a wrong pillar which resulted in the collapse.
Nwandu said there was nobody living in the house as at the time of the incident, adding that it was only the security guard that was resident in the entire building.
Top Stories