Some of the people who survived the carnage which left people dead in Jos, have spoken about how they escaped death. 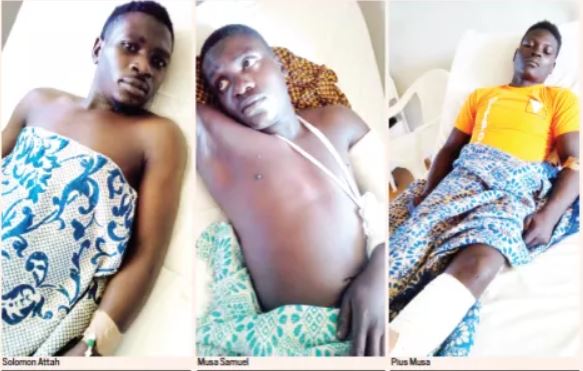 The survivors
Some victims of the Sunday, May 26, 2019, violence that erupted at Tina Junction, Dutse Uku and Angwan Damisa Area of Jos North LGA of Plateau State, have narrated their sad experiences while receiving treatment at the Jos University Teaching Hospital (JUTH). Violence erupted on the dark Sunday while Christians were attending church worship.
Five persons were confirmed killed, others injured, and 12 houses burnt. Saturday Telegraph gathered that violence erupted as result of the murder of a boy from Angwan Miango who was found dead at the boundary between the community and neighboring Rikkos, a community of Hausa extraction, in the metropolis.
The news of the death of the Christian boy however degenerated into full blown mayhem with gunshots rending the air and houses set ablaze. The violence also spread from the two communities to neighbouring Dutse-Uku, even as residents of Tina Junction and Yantrailer where most of the students of University of Jos students reside had their hearts in their mouths. Saturday Telegraph spoke with some of the victims of the violence who are undergraduate students of the University of Jos who as at last week were still receiving treatment for bullet wounds and sharp knives cut at the Jos University Teaching Hospital.
They recounted their harrowing experiences. Twenty-six-year old Solomon Attah who is a 200 level Student of University of Jos, studying History and International Studies, told Saturday Telegraph from his hospital bed that he was stabbed by some Hausa youths on that fateful Sunday while returning from church.
“I am Solomon Attah, 200 level Student of History and International studies, University of Jos; what happened that fateful Sunday is that I was returning from church and didn’t know that there was a problem in the community. Before I noticed it, some Hausa youth  rushed towards me and stabbed me with a knife at my back. They ran after inflicting cuts on me when they heard security personnel were approaching.
“Immediately, I found myself on the ground with blood was all over me. The next thing was I saw myself in the hospital. Actually being alive is due to God’s grace. He saved me; government needs to do something to protect us, university students, from those communities.”
Another victim, Joshua Daniel, also a 200 level Student of University of Jos, studying Educational Foundation had bullets wounds from the violence.
“I was coming back from church on Sunday around 1pm to 2 pm all I heard was report of bullets in my body and I didn’t know what happened afterwards,” the 23-years-old student recalled.
Also speaking to Saturday Telegraph from his hospital bed is 21-year-old Joshua Sambo who just completed his Diploma at the Plateau State Polytechnic Barkin Ladi. He said he was in front of his house in Tina Junction when gunshots hit him.
He said: “I was in front of my house around Dutse Ukwu when bullets hit me in my back; I didn’t know the direction where the bullets were coming from.”
However, for 27-year-old Musa Samuel, his situation was very critical. He was coming from church to his house when stray bullets hit him in his left hand.
“We were inside the church when we got the news of the violence, we couldn’t finish the church service neither did we take communion due to the situation. But when we were going home, our church member was shot in the process and he died  immediately. But when we were trying to take his corpse away stray bullets hit me in my hand. The next thing I knew was I found myself here on the hospital bed.”
Also, 21 years old Pius Musa receiving treatment for bullet wound at the Jos University Teaching Hospital and a car Mechanical Engineer told Saturday Telegraph that he was hit by stray bullets also behind Saint Michael Catholic Church where the youth leader of the church was killed.
The Plateau State Police Command confirmed that five persons were killed while 12 houses were burnt down during the violence that erupted in some part of Jos North Local Government Area of Plateau State on Sunday at the time Christians were attending church worship.
The Police Public Relations Officer, Plateau State Command, DSP Tyopev Mathias Terna, said as result of the violence five persons lost their lives and 12 houses were burnt down.
“On the 26/05/2019 about 1130hrs, the Plateau State Police Command received a report from one Sarki Arum ‘m’ of Tina Area of Jos North Local Government Area of Plateau State that one Enock Monday ‘m’ of Tina was seen lying motionless at an area between Dutse Uku and Angwan Damisa in Jos North Local Government.
“The Command immediately mobilised to the area and removed the body to Plateau Specialist Hospital where he was confirmed dead by the doctor on duty and corpse deposited at the mortuary of the same hospital.
“Youth of the area started protesting when the news of Enock’s death filtered into the community.
“The Area Commander Jos Metro mobilised personnel of the divisions within his jurisdiction and moved with the Commanding Officer of 8PMF and the Divisional Police Officer of Nasarawa Gwong Division under whose jurisdiction the crime was committed to the scene of the crime.
“As a result of the protest, five (5) persons lost their lives and twelve (12) houses were burnt down. Meanwhile the Berom Educational and Cultural Organisation (BECO) said it is saddened by the latest round of violence in the Tina Junction axis of the metropolis. BECO in a Press Statement signed by it Secretary General Da Chollom Gyang said from competent sources the outbreak of violence, on Sunday May 26, resulted in the death of not less than six persons.

“Unfortunate and sad as this may be, we are bold to note that the violence did not take any curious observer of the growing state of mutual misunderstanding, animosity and tactical suspicion that have characterised relationships in this area, being a border point between two antagonistic communities.
“One would have expected greater presence and impact of security agents here, to forestall any unforeseen developments of this nature. That this was not the case underscores our state of sadness and regret that it had to happen.”
According to the Berom group, they are further saddened that a lot of the casualties were recorded before the intervention by security men.
“Some of the victims, we are made to understand, were killed inside their homes by stray bullets. This ought not be so; as we call on the security agents to be more professional, tactical, humane and firm in handling issues of this nature”
The statement however called on the security agents to step up their acts to identify early warning signals that would lead to proactive steps aimed at nipping events in the bud before they break out.
“We equally call on our youths to be patient and exercise restraint in the face of deliberate provocation and maintain the peace.”
***
Source: NewTelegraph
Top Stories