The young man was re-elected by his fellow lawmakers for the second time in Kaduna state. 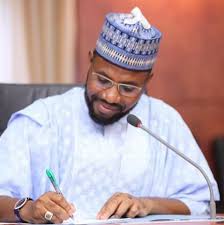 Aminu Abdullahi Shagali
Kaduna State House of Assembly (KSHA) has re-elected Aminu Abdullahi Shagali as its Speaker for the 6th assembly beginning Thursday.
39 years old Aminu Shagali was first elected into the state assembly in 2011, to represent Sabon Gari constituency.
He became the speaker of the assembly in 2015 following the emergence of the All Progressives Congress (APC) as the ruling political party in the state.
Shagali’s re-election did not, however, come as a surprise, as the leader of the ruling All Progressives Congress in the state, Governor Nasir El-Rufai had since made case for his return as speaker.
Governor El-Rufai had shortly after his re-election urged the lawmakers to maintain the leadership of the assembly, which he said had worked tirelessly with the executive to deliver good governance to the people of Kaduna state.
Top Stories