Justice Lawal-Akapo ruled that the 53 structures should be demolished by the enforcement unit of the state Ministry of Physical Planning and Urban Development. 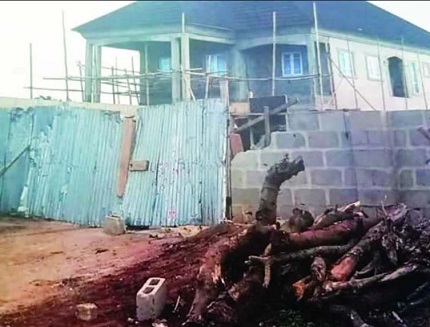 One of the marked buildings

The Lagos State High Court in Ikorodu has ordered the demolition of 53 structures built on an expanse of land acquired by the Federal Government for the Nigerian Telecommunication Limited in the Ikorodu area of the state.

PUNCH Metro had reported that some former workers of NITEL and its erstwhile mobile subsidiary, the Nigerian Mobile Telecommunications, and other beneficiaries, whom the land was allocated to, were being allegedly threatened by a Lagos family.

The allottees were said to have formed a group, the NITEL/MTEL Landlords Association, which instituted an action in court against the family, but suspected land grabbers allegedly encroached on the land and sold some part to unsuspecting people at ridiculous prices.

It was learnt that those who purchased land from the land grabbers built structures on it against the order of Justice I. B. Lawal-Akapo, who had prohibited construction works on the land pending the determination of the substantive suit.

The judge was said to have delegated a team made up of the Assistant Court Registrar, officials of the state ministries of Environment and Physical Planning and Urban Development as well as the claimants’ and defendants’ lawyers, accompanied by men of the Lagos State Police Command, to inspect the land to ascertain the number of structures built on it against the court’s instruction.

At the end of the inspection, 53 of such structures were identified and marked for demolition.

Our correspondent learnt that the Assistant Court Registrar was mandated to write a report on the inspection from which the judge would make a decision on the fate of the structures.

On Wednesday, February 27, 2019, Justice Lawal-Akapo ruled that the 53 structures should be demolished, adding that the demolition should be carried out by the enforcement unit of the state Ministry of Physical Planning and Urban Development.

The judge, who stated that the Commissioner of Police should provide security during the demolition, ruled that photographs of the demolished structures should be taken and filed with the court, adding that all parties should maintain the status quo pending the final determination of the suit.

“The Commissioner of Police, Lagos State, shall provide foolproof security arrangement through the operation unit, area commands and divisional levels to the officials of the Lagos State Ministry of Physical Planning and Urban Development from the beginning of the demolition till its completion.

“That photographs of the demolished structures shall be taken and filed in court.

“That all parties shall maintain that state of affairs pending the final determination of the suit.”

When contacted, the Permanent Secretary in the ministry, Foluso Dipe, said he would make enquiries and get back to our correspondent.

Dipe said, “I will make enquires and get back to you because I don’t have the information now.”

He had yet to get back to our correspondent as of the time this report was filed.
Top Stories