A funeral service has been held for the nine victims of the recent attacks residents of a Taraba community by suspected herdsmen. 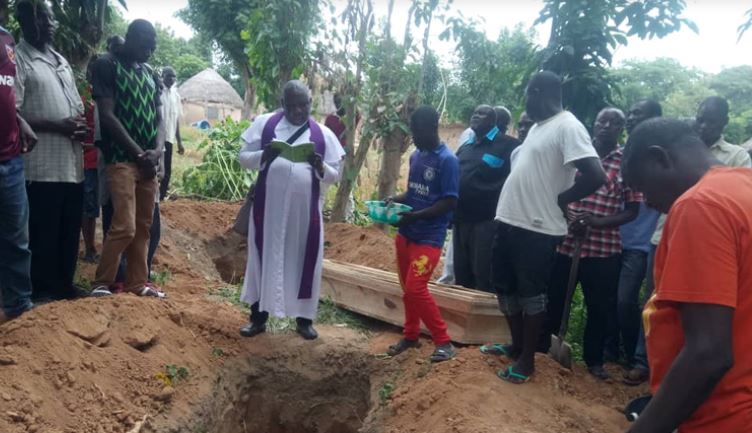 Funeral service held on Friday afternoon, June 21, 2019, in Janibanibu village by the Catholic Churchfor nine victims
during the recent attacks on Janibanibu and Kasuan Bera communities by suspected herdsmen. Photo: Justin Tyopuusu /Punch
According to a report by Punch Metro, there was wailing on Friday afternoon in Janibanibu village in Taraba State as the Catholic Church held funeral service for nine victims of the recent attacks on Janibanibu and Kasuan Bera communities by suspected herdsmen.
In his sermon during the service, Rev. Fr. Batare Eugene encouraged the people to forgive one another and return to God who alone he said could give and take life.
Batare said the grief following the attacks on Kona communities called for sober reflection and urged the people to unite against the common enemy trying to decimate them.
“I enjoin you to make peace with one another and trust God who alone can deliver us from the hands of the enemy.”
Fr. Cyriacus Kamai, the Parish Priest of St. John the Baptist Pastoral Area, Janibanibu, in his remarks condemned the blockage of the Jalingo – ATC – Wukari Road by irate youths during the crisis which led to the attack on innocent people.
Kamai who read the message of Archbishop Ignatius Kaigama and Bishop Charles Hammawa of Jalingo Diocese condemned the action of the youths. They called for calm and understanding.
“The Archbishop Kaigama and Bishop Hammawa all condemned the needless violence and burning of mosques by irate youths in protest over attacks on Kona communities.
“The two religious leaders urged parents and stakeholders to call the youths to order. The crisis is not a religious crisis and the state cannot afford to go into a religious crisis.
“Those attacking the communities are not in the town and we must avoid the temptation of attacking people inside the town to paint an impression of a religious crisis,” he said.
Our correspondent reports that five people were buried on Tuesday while four were buried on Friday in a mass grave in Janibanibu village.
It would be recalled that there were attacks on Janibanibu and Kasuan Bera communities on Sunday and Monday forcing people to flee the areas into the city center in Jalingo.
Top Stories